McConnnell: Romney Will Be The Nominee 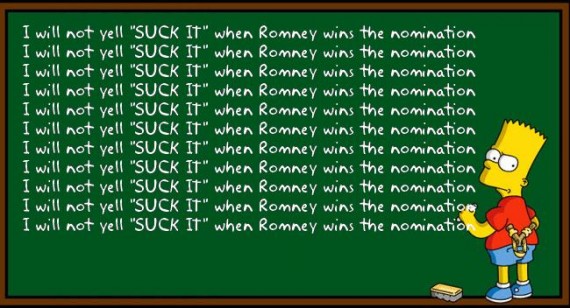 The Republican establishment continues to send the message that Mitt Romney is the inevitable nominee:

But the Kentucky Republican signaled on Sunday that Romney is almost certain to be his party’s pick to take on President Barack Obama in the November election.

“I think he is an excellent candidate, and the chances are overwhelming that he will be our nominee.  It seems to me we are in the final phases of wrapping up this nomination,” McConnell said on CNN’s “State of the Union.”

As if to confirm that McConnell said, over on NBC Wisconsin Senator Ron Johnson became the latest Washington politician to endorse Romney:

Sen. Ron Johnson (R-Wis.) endorsed Mitt Romney on NBC’s “Meet the Press” on Sunday, two days before a primary in Johnson’s home state that Romney hopes will help him to finally lock up the nomination.

“This is nothing negative about the other candidates. It’s just a recognition of the fact that Governor Romney has won more delegates. He’s the only person that really has a chance to take the winning number of delegates into the convention,” said the Wisconsin senator. “We have seven months before the election. Our top priority as fiscal conservatives is to make sure President Obama retires.”

Johnson said that extending the primary all the way to the Republican National Convention in August would hurt the GOP by keeping the focus off the general election. “It’s time to end this so we can spend the next seven months pointing out that President Obama has failed to lead,” he said.

If Romney pulls off a Maryland-D.C.-Wisconsin trifecta on Tuesday, which seems likely, I would expect to see more leading Republicans falling in line and putting pressure on Santorum and Gingrich to at least tone down their attacks on the party’s nominee.