Another data point demonstrating that a distinguished military career doesn't preclude being an awful human being or a crackpot. 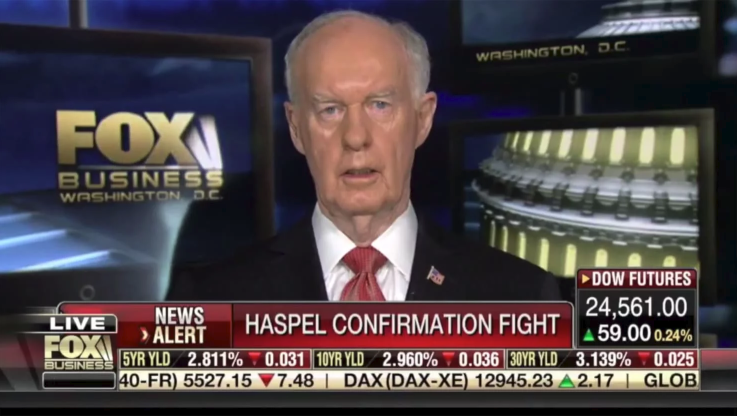 According to a frequent Fox Business Network military commentator, torture is good because it worked on Sen. John McCain (R-AZ).

McCain, who was tortured while a prisoner of war in Vietnam, has been outspoken in opposing Gina Haspel, President Trump’s pro-torture nominee to lead the Central Intelligence Agency.

“The fact is those methods can work, and they are effective, as former Vice President Cheney said,” McInerney continued, in a clip first spotted by Media Matters. “And if we have to use them to save a million American lives, we will do whatever we have to.”

McInerney, once a top TV pitchman for President George W. Bush’s Iraq War, recently served as a paid analyst on Fox News. He is no longer in that position, but continues to make frequent appearances across both Fox News and Fox Business, and has a penchant for outlandish claims related to military and foreign policy.

The former number-three commander of the Air Force was a frequent source of birther conspiracies about President Obama, often suggesting he was secretly a radical Muslim.

“I feel I have an obligation to the American people to be a part of the discourse and discuss these important national security issues because they are complex, especially on radical Islam,” McInerney told The Daily Beast shortly before appearing at a 2016 Trump rally. “As a nation we have not had it. We have a president that has suppressed it.”

McInerney also infamously claimed on Fox News that missing passenger jet MH370 was actually hijacked by terrorists and flown to Pakistan to be used for jihadist activities.

McInerney is, alas, but the latest data point demonstrating that a distinguished military career doesn’t preclude being an awful human being or a crackpot.

A Google search of “Songbird John” covering the entirety of his political career but excluding McInerney’s appearance on Varney’s show finds an incredible number of references. They seem to fall entirely into three categories: Fact check sites debunking the smears, nutjob sites repeating the smears, and false positives. (The last are either results having nothing to do with McCain or old pages who have automated sidebar or similar content populating the McInerney smear.)

The 2008 PolitiFact debunking, which is the first result, is rather exhaustive.