Steve Bainbridge points to a CNN/Money survey which purports to show that blogs have far less impact than recent media coverage has led some to think. Their finds are encapsulated in this graphic: 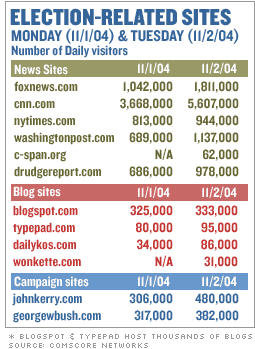 As Steve, NZ Bear, and Steven Taylor point out, the traffic numbers for the blogs in question are way, way off. Hell, OTB had nearly 15,000 unique visits on its own–and this is hardly the most trafficked blog out there.

The funny thing is that I know of no one who seriously argues that bloggers have a bigger audience than the mainstream media. Indeed, were that the case, bloggers would by definition be the mainstream media. We’re not there yet and, frankly, I don’t think we aspire to be. While quite a bit of independent reporting gets done in the blogosphere, we’re still mostly about analysis and commentary, not news. The more interesting debate, then, is whether the top bloggers are more influential than the top media pundits.

More importantly, though, I’m not sure that traffic is the best indicator of influence. Wonkette gets more visits than PowerLine or INDC Journal. Who had more impact on the election?