I’ve seen a few gripes on Twitter and elsewhere about President Obama and others seeming not to understand the difference between Memorial Day, which is set aside to honor those who died in combat, and Veterans Day, which honors those who served in the military.

This has long been a pet peeve of mine but the conflation of the two is now so universal that I’ve given up fighting it.  I’ve been at Veterans Day events run jointly by the Veterans of Foreign Wars and the American Legion where they plays Taps and read off a roll call of those who have died over the last year.  Similarly, Memorial Day events typically pay tribute to those who have served and, especially, those who now serve.

We shouldn’t be surprised that this happens.  Aside from the fact that 35 years of an all-volunteer force mean that relatively few have served, the two instances overlap considerably. Obviously, all who died in war are veterans.  Beyond that, though, we honor veterans because they have risked death in war, whether physically (by having gone to war) or theoretically (by being available for deployment).  And when we honor those who have fallen in past wars, it’s only natural to pay at least passing homage to those currently risking their lives in ongoing wars or those who did so in past wars and lived to tell the story.

Of course, for the vast majority of Americans, these are simply “days off” and accorded all the reverence and reflection we reserve for any other holiday.

Photo: Joseph Ambrose, an 86-year-old World War I veteran, attends the dedication day parade for the Vietnam Veterans Memorial in 1982, holding the flag that covered the casket of his son, who had been killed in the Korean War. (U.S. Government Photo) 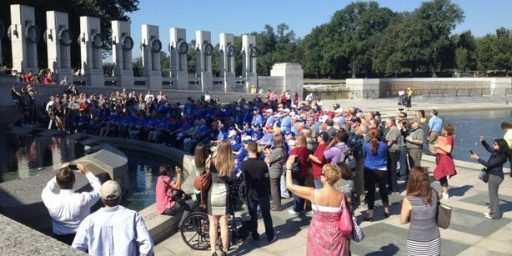