Michele Bachmann asked God if she should run for the U.S. Senate. Apparently, she got an answer. 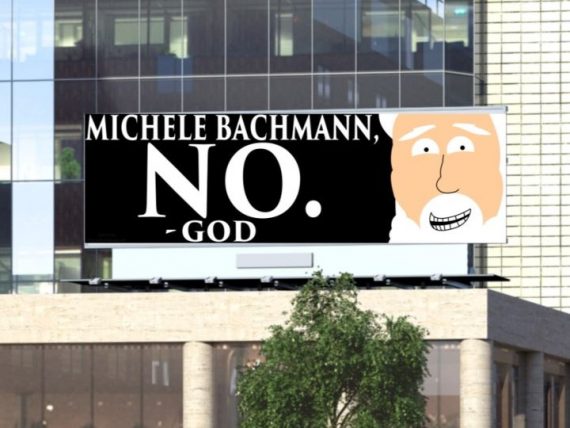 After Al Franken stepped aside as U.S. Senator due to an unfolding series of sexual harassment allegations, former Minnesota Congresswoman Michele Bachmann said she was considering running for the Republican nomination in the upcoming Special Election, saying that she would seek guidance from God. This led to no small amount of amusing commentary, as well as someone who purchased a billboard ad in which “God” advised the former Congresswoman not to run. Whether it was from the billboard, the Bible, or divine revelation, Bachmann appears to have gotten the message:

Michele Bachmann has decided that she will not run for former Sen. Al Franken’s (D) Minnesota seat, saying that she did not get a “sense from the lord” that she should launch a bid.

“It became very clear to me that I wasn’t hearing any call from God to do this,” Bachmann told radio host Jan Markell, as reported Monday by Minnesota Public Radio.

Bachmann, a former GOP representative and presidential candidate, said in a January interview that she was considering running for Franken’s seat, and that she would be “asking God” if she should run.

In reality, the likelihood that Bachmann would have won a race for the Republican nomination never seemed like they were very strong to begin with. During the time she served in Congress, there were several polls that indicated that she was unpopular in the state as a whole notwithstanding the fact that she continued to win reelection in a district that was distinctly more Republican than the rest of the state as a whole. It’s for this reason that most political observers who follow Minnesota politics that I’m aware of have consistently rejected the idea that Bachmann would ever become either a United States Senator from the state or a Governor. Put simply, while Republicans have been elected statewide in Minnesota in the past, with the most notable examples being former Governor Tim Pawlenty and former Senator Norm Coleman it seems apparent that she is distinctly far to the right of those two men, and likely out of step with where the statewide electorate stands even among Republican primary voters.

As things stand, it doesn’t appear that Republicans are going to put up much of a fight for Franken’s seat in any case. So far, the only major candidate who has declared their candidacy for the seat is State Senator Karin Housley. Other better known Republicans, such as former Governor Pawlenty and former Senator Coleman, have already taken their names out of contention. In no small part, this appears to be due to the fact that the state’s new Senator, former Lt. Governor Tina Smith. seems to be relatively popular statewide and would likely defeat whomever the Republicans put up against her, although there hasn’t been any significant head-to-head polling of the race to see if this is actually the case.

In any case, it looks likes we won’t have Michele Bachmann to kick around this year. We should all thank whatever deity or lack thereof intervened to make this happen.