The First Family can go on vacation, but politics never does. 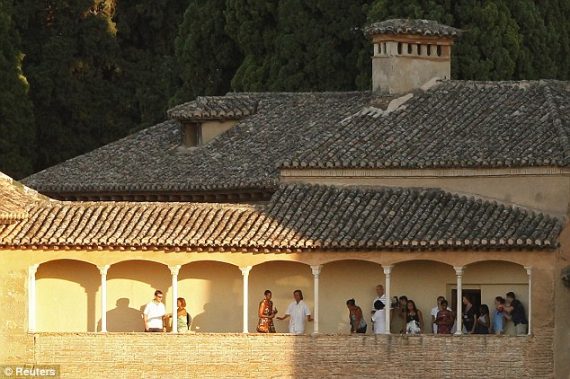 The British press, especially The Daily Mail, is making much of the fact that First Lady Michelle Obama is taking what is unquestionably a luxurious vacation on Spanish Mediterranean coast:

Michelle Obama today faced a fresh wave of attacks over her lavish break in Spain with 40 friends, which is likely to cost U.S. taxpayers a staggering £50,000 a day.

The First Lady has been lambasted for her extravagance at a time when the economy is still struggling. One blogger went so far as to brand her a modern-day Marie Antoinette.

The exact cost of the trip is unclear as Mrs Obama, 46, and her friends are footing personal expenses themselves – which is just as well.

For a start, they will be paying for the 60 rooms booked at the 129-room Hotel Villa Padierna. With basic rooms starting around £380 each, the nightly bill will be no less than £22,800.

Whether or not the taxpaying American will be paying for meals, they will definitely be footing the bill for the First Lady’s 68-strong security detail, her personal staff – and the use of presidential jet Air Force Two.

The per diems for the secret service team runs at around £172 each, which amounts to nearly £60,000 for the length of the summer break.

Mrs Obama’s personal staff, of which there are an unknown amount and who might cost considerably more per day, also have to be taken into account.

The American public will also cover the cost of the only official part of the holiday, a visit to the Spanish royal family on the island of Majorca.

This will involve transport there and back for the entourage – as well as travel, accommodation, food and expenses for all while on the island.

That translates to roughly 375,000 American dollars.  Back in the States, one Daily News columnist compared the First Lady to the wife of Louis XVI:

Sacrifice is something that many Americans are becoming all too familiar with during this economic downturn. It was a key theme in President Obama’s inaugural address to the nation, and he’s referenced it numerous times when lecturing the country on how to get back on its feet.

But while most of the country is pinching pennies and downsizing  summer sojourns – or forgoing them altogether – the Obamas don’t seem to be heeding their own advice. While many of us are struggling, the First Lady is spending the next few days in a five-star hotel on the chic Costa del Sol in southern Spain with 40 of her “closest friends.” According to CNN, the group is expected to occupy 60 to 70 rooms, more than a third of the lodgings at the 160-room resort. Not exactly what one would call cutting back in troubled times.

Reports are calling the lodgings of  Obama’s Spanish fiesta, the Hotel Villa Padierna in Marbella, “luxurious,” “posh” and “a millionaires’ playground.” Estimated room rate per night? Up to a staggering $2,500. Method of transportation? Air Force Two.

To be clear, what the Obamas do with their money is one thing; what they do with ours is another. Transporting and housing the estimated 70 Secret Service agents who will flank the material girl will cost the taxpayers a pretty penny.

Instead, Michelle Obama seems more like a modern-day Marie Antoinette – the French queen who spent extravagantly on clothes and jewels without a thought for her subjects’ plight – than an average mother of two. While she’s spent her time in the White House telling parents they should relieve their chubby kids’ dependency on sugar and stressing the importance of an organic veggie garden, hopping a jet to Europe to meet with Spanish royalty isn’t the visual the White House probably wants to project. Perhaps they’ve forgotten the damning image of John Kerry, on the eve of the 2004 election, windsurfing off the coast of Nantucket?

I don’t begrudge anyone rest and relaxation when they work hard. We all need downtime – the First Family included. It’s the extravagance of Michelle Obama’s trip and glitzy destination contrasted with President Obama’s demonization of the rich that smacks of hypocrisy and perpetuates a disconnect between the country and its leaders. Toning down the flash would humanize the Obamas and signify that they sympathize with the setbacks of the people they were elected to serve.

Roger L. Simon, meanwhile, sees the trip as a sign that the President doesn’t really care about the electoral consequences of actions like these:

Michelle’s $375,000 Spanish vacation — with the Daily Mail dubbing her a “modern-day Marie Antoinette” — is further proof of my thesis. What man who wanted to be re-elected (or see his party do well in November) would let his wife go off on such an “excellent adventure” in these economic times? Of course no one denies the right of people to have vacations – I’m coming to the end of one myself on my beloved Bainbridge Island — but closing Mediterranean beaches while booking 60-plus rooms in a five star Marbella hotel for her entourage? It is beyond tone deaf, perhaps to the level of subconscious (or even deliberate) self-sabotage[

If I were still a member of the Democratic Party, I would be most concerned. What is going on in the White House seems to be so disconnected from the reality of our country — with some indicating real unemployment at a staggering 22% — as to be teetering on the brink of a pyschological disorder. And in this case that disorder would be a folie a deux of some sort because Barack and Michelle appear to be colluding in it in some way, whatever the state of their relationship. And that disconnect — between them and the American people — is growing.

I don’t buy the Marie Antoinette analogy, and I’m not sure that Simon’s hypothesis is all that accurate either, but it does seem to me that a trip like this displays some incredible political myopia on the part of the Obama Administration regarding the perception that they’re creating in the eyes of the public.

This issue has been around before, of course, as conservative bloggers and pundits have been criticizing the President for number of times that he’s golfed, or the fact that he attends a baseball game on a Friday night. As James, Stephen, and myself have all argued on several occasions this summer, though, these criticisms are mostly ridiculous. The idea that the President isn’t allowed to vacation, or have a few hours of downtime on a golf course on a Sunday afternoon is based more in partisan sniping than it is in anything even remotely approaching substance.

The same logic, it seems to me, should apply to the rest of the First Family, and, at least initially, I shrugged off the reports about this European vacation. Do I care where Michelle Obama and her friends spend two weeks in the summer ? Not really, but I do care that at least part of it is on the taxpayers dime.

More importantly, though, if I were a political adviser in the Obama Administration I would’ve raised red flags about this months ago. The picture of the First Lady taking a luxurious European vacation while the American economy is, at best, languishing creates horrible political optics back home that can’t be any good for the Administration. Why couldn’t they have gone back to the Gulf Coast ? Or California ? Or, even Hawaii ? A domestic vacation at a private location would’ve barely made the headlines. Instead, while many Americans are foregoing vacations this summer, the President’s wife is on one that most Americans would never be able to afford. It’s Nancy Reagan and the china all over again, and, whether it’s fair or not, it creates the perception that President is out of touch with the rest of the country and, politically, that’s never a good impression to create.