Mike Tyson KO’d by Tomato Can

ESPN – Down for the count 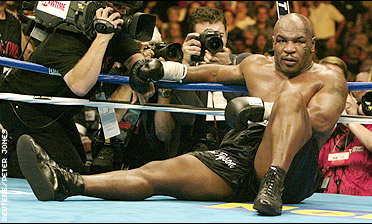 If it isn’t over, then indeed it should be. There’s no reason to go on like this. No one in his right mind would want to. Mike Tyson, of course, has never been accused of being fully sane. Calliope music plays in his head, and he might be able to convince himself it’s time to jump off the merry-go-round that has been his boxing career.

Danny Williams, a fighter only the sickest of boxing savants ever would have known about in the U.S. before the match was made, ended Tyson’s career Friday night in Louisville, Ky. A crowd of 17,000 rubberneckers showed up at Freedom Hall to witness a foregone conclusion. What they saw was a too-far-gone illusion. Williams survived a first-round onslaught to deposit Pugilistic Enemy No. 1 into the ropes late in the fourth round. Williams landed 19 unanswered punches, most to the head. Tyson finally slumped after Williams’ right fist landed on the temple, and referee Dennis Alfred counted Tyson out with nine seconds left until the bell.

The 38-year-old former undisputed champion of the world looked nothing like Kid Dynamite, nothing like the Baddest Man on the Planet, nothing like the most intimidating SOB ever to inflict pain for money. The talent, the fire and the persona are too far gone. At a time when boxing desperately needs someone to captivate us again, Tyson just doesn’t have it anymore. He will never discover it again, and the sport is worse off for it. Even his trainer realized it, although he wasn’t ready to come out and say it. Freddie Roach was near tears while speaking to reporters after the fight. He was asked, based on what he saw tonight, if Tyson could ever contend for the heavyweight title. “No,” Roach replied, the tone of resignation speaking volumes more than he wanted.