Not surprisingly, the last man to lead the Soviet Union believes we'd be better off if it still existed. 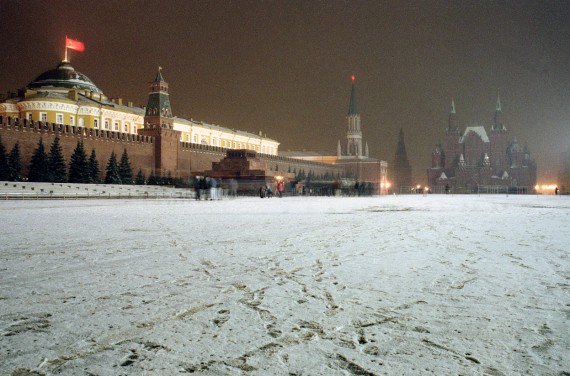 In the latest issue of The Nation, the last man to lead the Soviet Union argues that the world was better off when the USSR still existed. The United States, Gorbachev contends, misinterpreted the collapse of the Soviet Union and reacted to it by working outside the international organizations that had “kept the peace” during the cold war:

This event led to euphoria and a “winner’s complex” among the American political elite. The United States could not resist the temptation to announce its “victory” in the cold war. The “sole remaining superpower” staked a claim to monopoly leadership in world affairs. That, and the equating of the breakup of the Soviet Union with the end of the cold war, which in reality had ended two years before, has had far-reaching consequences. Therein are the roots of many mistakes that have brought the world to its current troubled state.

I used to say to my negotiating partners, Reagan, Bush and other Western leaders, that all of us would need to change our thinking—not only the Soviet Union but the West as well—because the rapid changes under way in the world leave all of us with no other choice. But as long as the West insisted on its purported victory in the cold war, it meant that no change was needed in the old cold war thinking and that the old methods, such as using military force and political and economic pressure to impose one model on everyone, would still be used.

Within such a matrix, the United Nations and its Security Council become expendable or at best an impediment, while international law is viewed as a burdensome legacy of the past. That was the attitude taken by the United States and its supporters in the former Yugoslavia in the 1990s and in Iraq in 2003. American pundits started talking about the United States as more than just a superpower, calling it a “hyperpower” capable of creating “a new kind of empire.”

Thinking in such terms in our time is a delusion. No wonder that the imperial project failed and that it soon became clear that it was a mission impossible even for the United States. Military interventions in Iraq and Afghanistan, based on the assumption that might is right, severely undermined the American economy, in addition to causing tens of thousands of deaths. Today many in the West admit that it was the wrong path to take, but the time that could have been used to build a truly new world order was lost.

In short, the world without the Soviet Union has not become safer, more just or more stable. Instead of a new world order—that is, enough global governance to prevent international affairs from becoming dangerously unpredictable—we have had global turmoil, a world drifting in uncharted waters. The global economic crisis that broke out in 2008 made that abundantly clear.

Not surprisingly, that last paragraph has raised no small degree of controversy. Before going through the reaction, though, I think it’s important to note what Gorbachev is saying here. He makes clear at the start of the essay that he’s not talking about the Soviet Union of Stalin or Brezhnev, but the one that he and his allies had been trying create since 1985 through his policies of perestroika and glasnost. He seems to believed that, with the burden of empire and the Cold War lifted, he could have transformed the USSR into the kind of country that many people thought Russia would become until, well, it didn’t. To some degree, perhaps, we can chalk this up to the lost dreams of a man with good intentions who saw his nation and the world move faster than he could possibly control. However, his premise seems to be that a strong, but liberalized, USSR would have been a good thing for the world.

Wait, a lifelong Soviet apparatchik is going to decry the irrelevance of the United Nations? The man who opened his eyes to the chronic poverty endured by Soviet subjects is going to sit in judgment on a superior system’s economic faults? This isn’t an essay. It’s historical-counterfactual equivalent of performative skepticism. Do we know for suuuuure that the Towers weren’t knocked down by a controlled demolition? Reaaaaally? What, you believe that was really bin Laden on those tapes…

These aren’t good-faith arguments. They’re not even forthright defenses of the Soviet Union. They’re juvenile attempts at satisfaction through reminding everyone that the world didn’t magically attain perfection after the fall of the USSR. The right response to that is to improve the world, not to cultivate nostalgia for one of the central reasons the 20th century was a slaughterhouse.

Suffice it to say there are many Poles, Czechs, Slovaks, Romanians, Hungarians, Finns, Ukrainians, Afghans and others who don’t really have much patience for Geyl in this context. If you can find an Afghan rebel that the Moscow bullets missed, ask him what he thinks of voting Communist.

Allahpundit, meanwhile, points out one of the fatal flaws in Gorbachev’s argument:

[T]o even begin to take this argument seriously, you have to assume the rosiest possible scenario for the transformation of the USSR from expansionist communist menace pre-Gorbachev to the cuddly UN-hugging perestroika pixies that Gorby envisions in his Nation piece. How likely is it, really, that the Soviets would have reacted to the rising regional ambitions of China and India by settling into some sort of benign isolationist Eurosocialist senescence? He can’t even bring himself to tell the truth about the Soviet reaction to German unification or Balkan independence in this piece. Why should we believe him when he assure us this particular Harry Turtledove novel would have turned out awesome?

To put it more bluntly, does anyone believe that the Soviet reaction to the insurgency in Chechnya would have been any different from the Russian reaction? And how long would Gorbachev’s benign Soviet Union have lasted in the face of the numerous terror attacks committed by Chechen rebels, not only in and near their own territory, but in the heart of Moscow itself? The totalitarian tendency would have reasserted itself very quickly, I submit.

And then there’s the whole Union part of the Soviet Union. Just as the Soviet sphere of influence in Eastern Europe collapsed in the wake of increased openness, the various nations that made of the the “Soviet Socialist Republics” grafted on to Mother Russia. For the most part, the union was entirely involuntary, and in the case of nations like Latvia, Lithuania, and Estonia it came about because of a treaty written with the blood of the Polish people. Other parts of the union were areas that had been absorbed into the Russian Empire centuries ago through conquest. In all cases, the memories ran far and deep, even when the Soviets tried to stamp out nationalism by mass murder, starvation, and forced deportation as they did in Ukraine. Gorbachev fails to acknowledge any of this in his essay and seems to hold on to the delusion that he could have kept the Soviet Union united even though it was clear that the non-Russian parts of the Union had no desire to remain united.

Gorbachev also apparently neglects to consider the extent to which the Muslim republics of the USSR (Kazakhstan, Uzbekistan, Turkmenistan, Azerbaijan, Kyrgyzstan) would have taken the same course as Chechnya had they been forced to remain united to Moscow.  While he criticizes the United States for its unilateral action in Iraq, Gorbachev doesn’t consider the fact that it’s just as likely that the USSR would have ended up in a war against Islam in the 1990s. A Muslim uprising in the Central Asian Republics, followed by repression from Moscow, would’ve had far reaching consequences that would put the lie to the claim that the world would be better off if the USSR still existed.

Finally, Gorbachev entire argument rests on the premise that it would have even been possible for him to keep the Soviet Union united. In that regard it’s interesting to note where he places the blame for the break up of the Soviet Union:

Contrary to what is sometimes asserted, the Soviet Union was not destroyed by any foreign power but as a result of internal developments. First, in August 1991 the anti-perestroika conservative forces organized a coup against my leadership that failed but weakened my position. Then, on December 8, defying the will of the people, who had supported renewal of the union in a referendum in March 1991, the leaders of three Soviet republics—Russian President Boris Yeltsin and the leaders of Ukraine and Belorussia—meeting in secret, abolished the Union.

Gorbachev is correct that the coup in August 1991 was the final event that set the USSR down the road to destruction, but he’s naive if he thinks that the breakup would not have happened if the coup had not occurred. The coup occurred largely because the conservative forces in Soviet government, most of them people Gorbachev had considered allies, perceived correctly that the nation was falling apart around them. The overthrow of pro-Soviet regimes in Eastern Europe, which was common knowledge inside the Soviet Union thanks to glasnost, caused the fire of independence to spread to the Republics. First it was the Baltic states, whose loyalty was tenuous at best, but it would have inevitably spread elsewhere. Once the coup occurred and Gorbachev was revealed to be the paper tiger he had become at that point, the collapse of his nation was inevitable. The socialist economic system had already failed, the communist political system wasn’t far behind.

There’s no doubt that the world has been disordered to say the least since the Cold War ended and the Soviet Union collapsed. However, to argue that the world was better when Eurasia was ruled by a repressive regime centered in Moscow is the height of foolish nostalgia. Gorbachev deserves a lot of respect, more than he’s given in his home country for certain, but this argument of his is just sheer absurdity.