The U.S. military is funding research into improving prostethics, especially for hands and arms, in order to help rehabilitate soldiers injured in battle.

The Defense Department is embarking on a multimillion-dollar research program to revolutionize upper-body prosthetics after a surge in troops who have lost hands and arms in the Iraq and Afghanistan wars.

The technology for artificial hands and arms hasn’t improved much since World War II. During the next four years, the Pentagon will spend almost $35 million to develop improved artificial arms, aiming for one a Defense Department report says will Ã¢€œfeel, look and performÃ¢€ like a real arm guided by the central nervous system. The commitment is the largest pool of funding for prosthetics in at least a decade, says Jan Walker, a spokeswoman for the Defense Advanced Research Projects Agency, which will award the contracts.

Improved body armor has led to the increased injuries to arms and hands, says Lt. Col. Paul Pasquina, medical director of the amputee program at Walter Reed Army Medical Center. The armor protects the upper torso but not the limbs and in some cases saves troops who would have died in previous wars. Also, Pasquina says, insurgents’ use of rocket-propelled grenades and roadside bombs causes devastating injuries that lead to amputations.

A total of 337 U.S. troops have lost at least one limb in Iraq or Afghanistan and have been treated at Army military hospitals. Of those, 93, or more than a quarter, are hand or arm amputees. Overall, hand and arm amputees make up only about 5% of all Department of Veterans Affairs patients who have lost a limb from wartime injuries, accidents or disease, department spokesman Terry Jemison says.

Artificial legs are more sophisticated than upper-body prosthetics, because there’s a larger market for them, says Todd Kuiken, director of the amputee program at the Rehabilitation Institute of Chicago. It’s difficult, he says, to design artificial arms and hands light enough to be practical and to replicate the hand’s fine motor skills.

More from a sidebar story:

Sgt. James Ã¢€œEddieÃ¢€ Wright can drive a car, shoot a rifle and handle a bayonet. That seems unremarkable unless you know this: Wright has no hands. They were blown off in a fierce battle near Fallujah, Iraq, in April 2004, when his unit was ambushed by about 40 insurgents. This summer, after intense rehabilitation, Wright returned to active duty in the Marine Corps as a martial arts instructor.

It is perhaps telling that he uses traditional metal hook prosthetics as his new hands. The only double-arm amputee from the Iraq war to return to military service, Wright chose the World War II-era technology instead of several newer, battery-powered prosthetic hands now on the market. Ã¢€œI remember when I first came back for rehabilitation, they were touting the myoelectric (battery-powered) hands as the greatest innovation. I was so disappointed,Ã¢€ Wright said, describing how the hooks are much easier because they don’t fall off his arm, are supple enough to Ã¢€œpick up a paper clipÃ¢€ and are much more reliable than battery-powered limbs.

Recognizing that the technology for hands and arms hasn’t improved significantly in the past six decades, the Defense Department is embarking on a multimillion-dollar research program to revolutionize upper-body prosthetics. Over the next four years, the Pentagon will fund development of what it hopes will be vastly improved artificial hands and arms that can be controlled by the central nervous system.

Richard Weir, a Department of Veterans Affairs scientist in Chicago, says the Pentagon probably won’t be able to achieve every goal right away. But Weir said he believes the research will spin off better technologies for long-suffering arm amputees. Ã¢€œI imagine we’ll see a big advance in the next couple of years,Ã¢€ said Fred Downs, a Vietnam War amputee who is the VA’s chief consultant for prosthetics.

A variety of artificial arms are available for military personnel and civilians. They range from flesh-colored artificial hands that are solely cosmetic to cable-controlled hooks, such as Wright’s, to battery-powered arms with motors that control elbows and hands. Only about half of all arm amputees who are fitted with prosthetics even use them, said Joe Miller, who oversees prosthetics at Walter Reed Army Medical Center in Washington, D.C. Many are heavy, hard to use and prone to break.

I had no idea the technology in this area was so antequated. Certainly, this is money well spent.

Update: A commentator observes that the last sentence is, “An odd endorsement, coming from a conservative.”

From an economic standpoint, my philosophy is that the government should step in only when the free market will not provide the service. That’s the case here. The number of people who need prostestic hands and arms is obviously too small to support the R&D on a purely for-profit basis.

The amount of money at stake here is a pittance compared to our defense budget and the amount of benefit derived could be quite high. This strikes me as a no-brainer financially.

Moreover, it has always been taken as a given by conservatives and liberals alike that we have a duty to take care of those harmed by service to society. People injured fighting in our wars, defending our streets, or rescuing us from fires certainly deserve all reasonable assistance from the government in getting back as much of a normal life as possible. 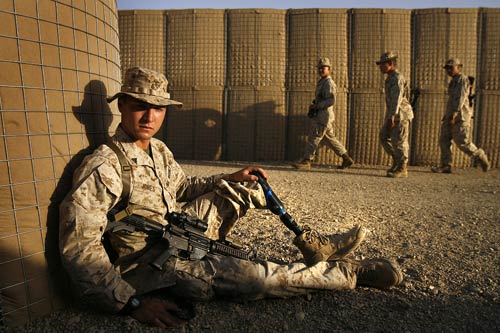