Yesterday saw some of the biggest protests ever to rock Egypt. Where does it go from here? 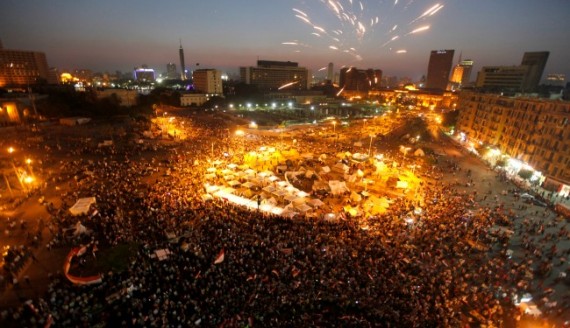 Protests had been scheduled in Egypt for yesterday to mark the one-year anniversary of the regime of President Mohammed Morsi for some time, but it seems clear that nobody quite anticipated the volume of protesters that showed up yesterday:

CAIRO — Egypt’s armed forces threatened on Monday to intervene in the country’s political crisis, warning President Mohamed Morsi and other politicians that they had 48 hours to respond to an outpouring of popular protests that have included demands for his resignation.

In a statement read on state television, General Abdel Fattah al-Sisi, the head of the Egyptian military, said the mass demonstrations that intensified over the weekend, including the storming of the Muslim Brotherhood headquarters in Cairo early Monday, reflected an “unprecedented” expression of popular anger at Mr. Morsi and his Islamist backers in the brotherhood during his first year in power.

It was unclear from the general’s statement whether the military was specifically demanding that Mr. Morsi resign. But the statement said that if Mr. Morsi did not take steps to address demands for a more inclusive government, the armed forces would move to impose its “own road map for the future.”

The Health Ministry said on Monday that 16 people had died in the protests, including eight in the battle outside the Muslim Brotherhood headquarters, most of them from gunshot wounds. All of those killed outside the headquarters were young, including one who was 14 and another who 19, the ministry said. One died of heat-related causes at a demonstration outside the presidential palace.

After dawn broke Monday, some demonstrators remained in Tahrir Square, resting under impromptu shelters. While much of the protest elsewhere in Cairo seemed peaceful, activists reported dozens of sexual assaults on women in Tahrir Square overnight.

The fiercest confrontation seemed to be at the Brotherhood headquarters where members of the organization who were trapped inside fired bursts of birdshot at the attackers and wounded several of them.

After pelting the almost-empty building for hours with stones, Molotov cocktails and fireworks, the attackers doused its logo with kerosene and set it on fire, witnesses said, seeming to throw what appeared to be sandbags used to fortify the windows out onto the street.

It was not immediately clear what became of the Brotherhood members, but shortly before the building was stormed, armored government vehicles were seen in the area, possibly as part of an evacuation team.

News reports on Monday spoke of fatalities across the nation numbering around 16.

The scale of the demonstrations, just one year after crowds in the same square cheered Mr. Morsi’s inauguration, appeared to exceed even the mass street protests in the heady final days of the uprising that overthrew President Hosni Mubarak in 2011. At a moment when Mr. Morsi is still struggling to control the bureaucracy and just beginning to build public support for painful economic reforms, the protests have raised new hurdles to his ability to lead the country as well as new questions about Egypt’s path to stability.

Demonstrators said they were angry about the lack of public security, the desperate state of the Egyptian economy and an increase in sectarian tensions. But the common denominator across the country was the conviction that Mr. Morsi had failed to transcend his roots in the Brotherhood, an insular Islamist group officially outlawed under Mr. Mubarak that is now considered Egypt’s most formidable political force.

The scale of the protests across the country delivered a sharp rebuke to the group’s claim that its victories in Egypt’s newly open parliamentary and presidential elections gave it a mandate to speak for most Egyptians.

“Enough is enough,” said Alaa al-Aswany, a prominent Egyptian writer who was among the many at the protests who had supported the president just a year ago. “It has been decided for Mr. Morsi. Now, we are waiting for him to understand.”

Shadi Hamid, a researcher at the Brookings Doha Center in Qatar who studies the Muslim Brotherhood closely, said: “The Brotherhood underestimated its opposition.” He added: “This is going to be a real moment of truth for the Brotherhood.”

While there certainly seems to be a political element to the protests, Juan Cole points out that, as with the protests that began in January 2011 and eventually led to the downfall of the Mubarak regime,  there is an economic element to these protests as well:

Much of the protest is economic. Morsi’s government has pursued austerity policies and it has failed to revive tourism or attract substantial productive investment. Egypt’s foreign currency reserves have been cut in half, causing the Egyptian pound to fall in value, and hurting Egyptians, who depend on imported food and fuel. The textile workers of al-Mahalla al-Kubra,whose 2006-2008 strikes were a rallying cry for anti-Mubarak activists, have warned that under Morsi their factories are threatened with closure altogether. Although some of the animus against Morsi comes from liberals and secularists annoyed by his religious fundamentalism, many of the protesters on Sunday were devout Muslims who just object to Morsi’s high-handed style of governing, failed economic policies, and favoritism toward his Muslim Brotherhood base. One banner in Tahrir said, ‘we are for Islam, against the Muslim Brotherhood.’

At the same time, though, one should make no mistake that there are elements driving these protests who see this as a full-on attack against the rule of the Muslim Brotherhood, as The Atlantic’s J.J Gould finds in the person of activist Mona Eltahawy:

The Muslim Brotherhood has, in other words, accelerated both its political implosion and the comprehensive discrediting of its political ideology — at the cost to the Egyptian people of having had to endure a year of super-dreadful governance:

So what we’re now doing is, we’re telling them, “You can’t use this Islam card anymore.” When I was a journalist in Cairo in the 1990s, we would ask them, “What do you represent?” Because they would love to play the victim: “Mubarak imprisons us! Mubarak tortures us!” We would say, “But what’s your platform?” They would say, “Islam is the solution!” And that is nonsense. Islam is not the solution. The solution is to get people jobs. The solution is to make sure that cars are not lining up outside gas stations for hours. The solution is to make sure that torture under the Muslim Brotherhood government is [understood to be] just as bad as torture under Mubarak and the junta.

If Eltahawy is right, what’s happening on the streets of Cairo now will extend into a full-on second Egyptian revolution — and will be, yes, exactly what Egypt needs: “When Muslims go to vote, … we don’t want empty slogans, like ‘Islam is the solution.’ We want: ‘I’m going to give your son or daughter a job. I’m going to make this street safe. I’m going to reform the [security forces], which broke my arms and sexually assaulted me and killed hundreds and thousands of Egyptians throughout decades of dictatorship,'” she said. “… as difficult as it is for me as an Egyptian to watch Egypt on the so-called ‘brink,’ this is a great moment for us to finally move beyond dictatorship and the military and Islamists.”

The big questions that remain, of course, are involve whether the protests will continue, how the government will respond, and what the military will do. On that last note, I noted last week that, in advance of Sunday’s protests, the military was hinting that it was prepared to return to some kind of an active role in Egyptian politics. Today, military leaders threatened to follow through on that promise with a warning to the government that it had a limited amount of time to resolve the grievances expressed by the protesters:

CAIRO (Reuters) – Egypt’s powerful armed forces issued a virtual ultimatum to Islamist President Mohamed Mursi on Monday, calling on the nation’s feuding politicians to agree on an inclusive roadmap for the country’s future within 48 hours.

A dramatic military statement broadcast on state television declared the nation was in danger after millions of Egyptians took to the streets on Sunday to demand that Mursi quit and the headquarters of the ruling Muslim Brotherhood were ransacked.

“If the demands of the people are not realised within the defined period, it will be incumbent upon (the armed forces)… to announce a road map for the future,” said the statement by chief-of-staff General Abdel Fattah al-Sisi. It was followed by patriotic music.

The people had expressed their will with unprecedented clarity in the mass demonstrations and wasting more time would only increase the danger of division and violence, he said.

The army said it would oversee the implementation of the roadmap it sought “with the participation of all factions and national parties, including young people”, but it would not get directly involved in politics or government.

Anti-Mursi demonstrators outside the presidential palace cheered the army statement, and the main opposition National Salvation Front, which has demanded a national unity government for months, applauded the military’s move.

The fact that the anti-Mursi demonstrators actually seem to be supporting the possibility of the military stepping back into Egyptian politics after having overthrown military rule that has stretched back to the time of Nassar only two years ago is pretty striking. If nothing else, it shows the extent to which the Mursi Administration has so quickly discredited itself in the eyes of the public, both by adhering so closely to the Muslim Brotherhood party line and by failing to solve the economic problems that sent the people into the streets in January 2011 to begin with. Does this mean the end of what’s been passing for democracy in Egypt for the past year or so in Egypt, though? It seems far too early to say that. At the very least, though, it appears that Egypt is once again entering a period of political unrest motivated by both the political overreaches of the regime and the state of the economy. Where it goes from here only time will tell.

Update: Stephen Taylor also has some thoughts on the events in Egypt.