Trending on Twitter this morning is a collection of infographics compiled by Ezra Klein under the heading "22 maps and charts that will surprise you."

Trending on Twitter this morning is a collection of infographics compiled by Ezra Klein under the heading “22 maps and charts that will surprise you.”

The one making the rounds is number 18, “If the world was as tightly packed as New York City, everyone could fit into Texas.”

This fascinating infographic from Per Square Mile shows that if everyone in the world lived as close together as, say, New Yorkers, they could all fit into Texas. Which is all to say that we’ve got a lot more land than we have people. But there’s an important caveat: it takes a lot of land to support all those people. As Per Square Mile goes on to note, if everyone in the world required as much land to support them as Americans do, we would need four earths. 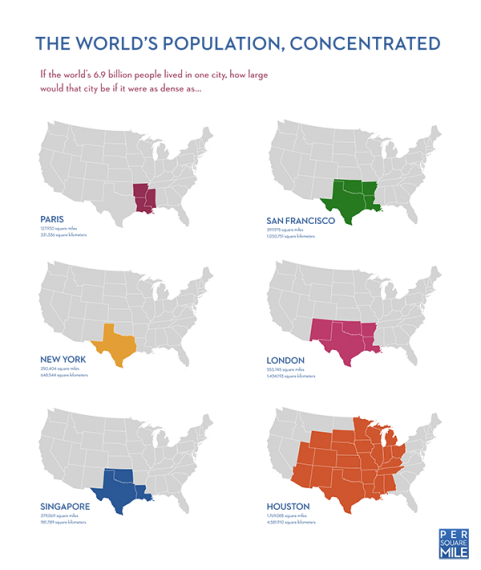 That’s pretty impressive. Perhaps more interesting is #15, “Half of US GDP comes from these 23 orange blotches.”

Half of America’s gross domestic product comes from the 23 orange blotches on this map. The other half comes from the vast acres of blue. Those orange blotches are America’s largest metro areas — and they absolutely power the American economy. But though small in size, they’re large in population: about 110 million people live in those orange blotches, says Reddit user Atrubetskoy, who created the map. So what you’re seeing on this map isn’t just that there’s a lot of economic activity compressed into some very small spaces in America, but that there are huge swaths of the American landscape where not that many people live. 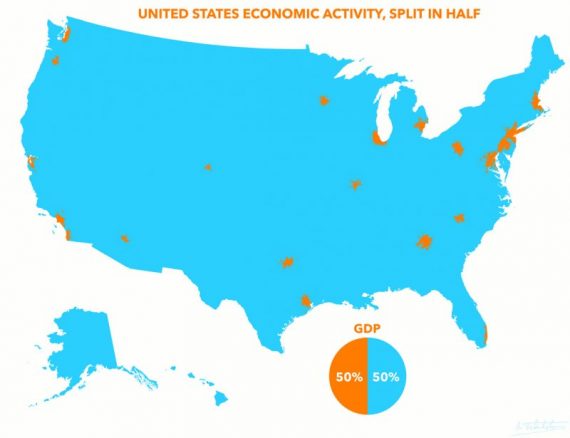 While I’ve seen something like it before, #3, “Africa is much bigger than you think,” is also pretty impressive.

Most maps you see are based on the “Mercator projection,” so named for Gerardus Mercator, who came up with it in 1559. The Mercator projection is excellent for sailing, as it shows constant bearing as a straight line. But it’s terrible for estimating the size of large masses of land — particularly when they’re close to poles. Under the Mercator projection, for instance, Africa looks to be about the same size as Greenland; it’s actually 14 times larger. The Economist — building on work by Kai Krause — made this graphic showing Africa’s true size: bigger not just than Greenland, but than China, the United States, India and Western Europe put together.

The whole collection is worth a look.