Misleading Chart of the Day

A graph on public debt making the rounds is being used to misdirect rather than clarify.

A graph on public debt making the rounds misdirects as much as it clarifies. [Actually, as Daniel Larison correctly points out via Twitter, the chart’s fine; it’s the spin being put on the chart that’s the problem.] 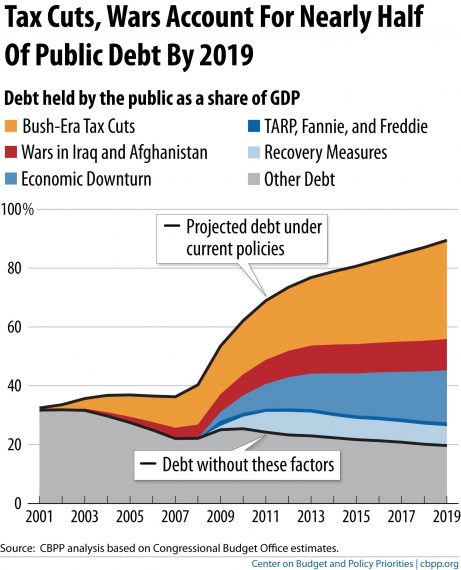 The single thing you should look at to understand the debt clock and what it is — or isn’t — telling you is this graph from the Center on Budget and Policy Priorities. It does something very simple. It takes public debt since 2001 — which is when we last saw surpluses — and breaks it into its component parts.

You can see it kind of looks like a layer cake. In fact, the folks at the Center on Budget and Policy Priorities call it “the parfait graph.”

In second place is the economic crisis. That’s the medium blue. Recessions drive tax revenue down because people lose their jobs, and when you lose your job, you lose your income, and when you lose your income, you can’t pay taxes. Tax revenues in recent years have been 15.4 percent of GDP — the lowest level since the 1950s. Meanwhile, they drive social spending up, because programs like unemployment insurance and Medicaid automatically begin spending more to help the people who have been laid off.

Then comes the wars in Iraq and Afghanistan. That’s the red. And then recovery measures like the stimulus. That’s the light blue, and the part for which you can really blame Obama and the Democrats- though it’s worth remembering that the stimulus had to happen because of a recession that began before Obama entered office, and that the Senate Republicans proposed and voted for a $3 trillion tax cut stimulus that would have added almost four times what Obama’s stimulus added to the debt.

Then there’s the financial rescue measures like TARP, which is the dark blue line. That’s almost nothing, as much of that money has been paid back.

If we didn’t have all that? If there’d been no Bush tax cuts, no wars, no financial crisis and everything else had been the same? Debt would be between 20 and 30 percent of GDP today, rather than almost 100 percent.

Now, up to a point, this is an important argument. Republicans are trying to place all of the blame for the skyrocketing of the debt under Obama on Obama when a huge chunk of it is a result of policies they support. Fair enough.

But it’s too cute by far to credit all of the yellow, red, and blue to Republicans while only assigning the “recovery measures” to Obama and the Democrats.

While it’s true that the Republicans have fought tooth and nail to make the Bush tax cuts permanent, Obama has not only gone along but has embraced with great fanfare extending all of the Bush tax cuts except those on the tiny sliver at the top. It’s not like the Democrats have gone out on a limb of fiscal responsibility and said, “Sorry, middle class Americans, we’re going to hike your taxes during the middle of a sluggish economy because we need the cash to pay for the government programs that you love.” So, Republican recalcitrance is the cause of only a small portion of the yellow from January 20, 2009 onward; the rest is bipartisan pandering.

Obama won the Democratic nomination largely on the strength of having opposed the Iraq War from the beginning while most of his major opponents supported it. But his predecessor had already set into motion a plan that extracted the country from that war; all Obama did was follow it.  (And, to be fair, resisted pressure from some Republicans to somehow pressure the Iraqi government into keeping it going.)

On Afghanistan, he not only did nothing to wind down a war that was obviously unwinnable by the time he took office but doubled down on it. He’s not only gotten a lot of American soldiers and marines killed needlessly, the continuation of the war and the debt incurred fighting it is on him. (Not that there has been much leadership in the other party on this matter, either. A President McCain may well have done the same stupid thing. But we’re running the accounting based on who’s sitting in the big chair, not a hypothetical alternative history.)

Under Bush and a Republican Congress, we recklessly ran up the debt through a combination of prolonged wars, expansion of popular entitlement programs, and tax cuts. An internal revolt has brought to power Republican True Believers who actually want to cut back government spending and get the debt back under control—although not if it means raising taxes.

But Obama continued the popular tax cuts and refused to take the heat for backing us out of Afghanistan, preferring to get American troops killed in a fruitless effort than risk being painted as “weak” by his opponents. At the very least, he can take the blame for the fiscal consequences.