Is the presumptive Republican nominee too handsome, too rich, and too pompous to win the hearts of ordinary Americans? 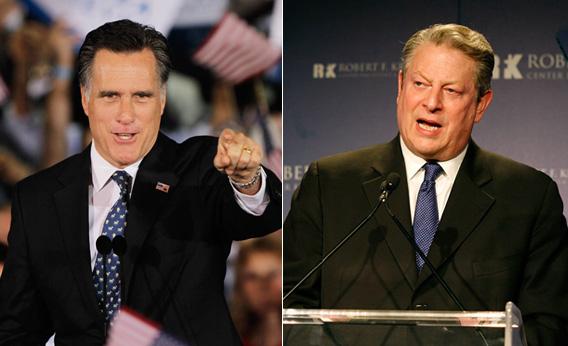 In what fellower Slater Matt Yglesias terms ” a calculated effort to annoy the political science blogosphere,” Jacob Weisberg declares, “Romney Is Kerry. Or Maybe Gore. He’s too handsome, too rich, and too pompous to win the hearts of ordinary Americans.”

Gore and Kerry both suffered from the same characterizations that get applied to Romney—too wooden in person while too flexible in their views. Their supporters often argued that qualifications were what mattered. But ominously for Romney, both Gore and Kerry lost winnable races because of their flawed personalities. George W. Bush, on the other hand, got elected and re-elected, despite his enormous, substantive shortcomings, because ordinary people found it easy to relate to him at a personal level. They felt he wasn’t trying to be someone different from who he was.

Romney, Kerry, and Gore are all, in a way, versions of the same political type. Statuesque, handsome, from privileged backgrounds and impeccably credentialed, they have no log-cabin stories to humanize and ground them. Unlike a Lyndon Johnson, a Richard Nixon, a Ronald Reagan, a Bill Clinton, or a Barack Obama, they didn’t overcome humble origins or broken families. Romney’s background is alien to most Americans not because he descends from polygamists but because his father was a governor of Michigan, an automobile company CEO, and a presidential candidate.

In his attempt to overcome his privileged origins, the unloved candidate struggles to establish his plain-folks ordinariness in ways that inevitably backfire.

While this seems a fair comparison on its surface, it has two problems. First, Al Gore was not particularly handsome. (Or, as a popular Internet meme has it, Al Gore is fat.) Second, despite his well-established flaws, Al Gore actually received more half a million more votes in 2000 than George W. Bush. Indeed, John Kerry got 59 million-odd votes, only 3 million fewer than Bush. So, it’s not like there was some mass rejection of either man.

For that matter, while he was folksier and more at ease with his public image than his rivals,
Bush was also born to money and power; his daddy was president and his granddaddy was a US Senator.

That said, I believe Weisberg is right that Gore, Kerry, and Romney share some traits that draw attention away from their strengths. As Joe Scarborough argued passionately today on “Morning Joe,” Romney would be far better off to stop pretending that he has a lot in common with the common man–the nonsense about his having been unemployed and fearing for his job security, for example–and just acknowledge that he had some advantages in life and made the most of them. Nobody held that against John Kennedy or Franklin Roosevelt, after all.