An odd meme's developing that Mitt Romney's campaign is in financial trouble. 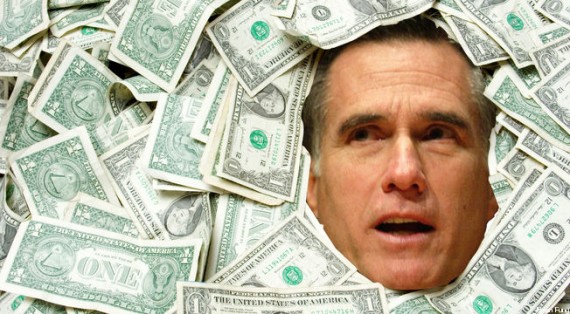 An odd meme’s developing that Mitt Romney’s campaign is in financial trouble. It may well be in trouble–but money isn’t the issue.

Mitt Romney is burning through cash more than twice as fast as he’s raising it, new reports filed Monday show — a clear sign that a protracted GOP primary fight could leave the front-runner limping into a general election fight with President Barack Obama.

Romney’s presidential campaign and the super PAC supporting him pulled in $13.1 million in January, but spent $32.7 million in the same month — an astounding burn rate more than double any of his rivals’ campaigns or super PACs.

The filings also show Romney’s fundraising operation is struggling to pick up momentum, seeing a minimal surge in cash after his big New Hampshire win and a plunge after his South Carolina loss.

While Romney’s campaign and his super PAC finished January with $24 million in the bank — more cash than the campaigns and super PACs of Santorum, Ron Paul and Newt Gingrich combined — whether Romney can sustain his spending-to-fundraising ratio after the next few contests is an open question.

GOP insiders worry that if Romney and his allies are forced to continue to outspend his competitors by mega-margins without winning over new donors, he could run the risk of tapping out core donors before Republicans even get to the general election showdown with Obama, whose campaign has deeper pockets than any prospective GOP rival.

TPM weighs in with “Two Charts That Should Make Romney Gulp.”

One good measure of fundraising strength with the masses is contributors who have given less than $200, who are not listed individually in finance reports. Let’s take a look at how the candidates stack up in the chart below, which shows how many of their millions have come from these low-money donors versus the higher rollers in the 2012 cycle.

As you can see, Romney is the clear anomaly by a long shot, raising nearly 90 percent of his total haul from larger contributions. By contrast, only around 40% of Obama’s donations are from individuals who have given more than $200 total and his smaller contributors alone raised more money in total than Romney’s entire fundraising operation. For the rest of the Republican field, the ratio is somewhere closer to 50-50 — take a look at the total small donor cash for Gingrich and Paul, for example, and you see that their huge disadvantage versus Romney is almost entirely due to the frontrunner’s bigger contributors.

“What it shows is that [Romney] does not have a broad base of support among small donors, who are motivated to give small amounts to the campaign,” campaign finance expert and UC-Irvine professor Richard Hasen told TPM.

But the real worry for Romney is maxed out donors, who have given the $2,500 limit to his primary run and can no longer legally contribute. The chart below shows what percentage of each candidate’s total cash as of the start of 2012 came from top dollar donations.

Romney’s inability to close out a race that he appeared as recently as a month ago to be on the verge of dominating has to be troubling, especially given the weakness of the field. But he’s simply not going to need to spend money at the current clip much longer. Either he wins Michigan and Arizona and rights his ship or he’s toast.

Further, one has to read deep into the TPM story to see that its entire premise is false:

Gingrich, Santorum, and Paul have not been particularly impressive at bringing in cash lately and none of them beat Romney’s January numbers.

But, much more importantly, Romney has a weapon that no candidate had in 2008: Super PACs. Thanks to the Supreme Court’s Citizens United decision, those rich donors who want to help out Romney with more than $2,500 can cut a check as gaudy as they want to an independent group called Restore Our Future, which is run by his former staffers,. And that’s exactly what they’re doing. Not only did Romney’s Super PAC outraise all its rivals in 2012, but the vast majority of the donations were over $100,000. Only in the last few weeks, with Sheldon Adelson cutting $5 million checks to Newt Gingrich ahead of competitive primaries, are his rivals beginning to compete.

Aside from the fact that Super PACs don’t really have anything to do with Citizens United–Adelson could give as much money to independent groups before as now; the only difference is that corporations can now do the same–this is right. So, not only do Romney’s opponents have more fundraising difficulty than he does but he’s effectively got no cap on his ability to raise.

The trouble with Super PACs is that while they can help blanket the airwaves with attack ads, the campaign still needs to raise money to finance basic necessities like staff and travel.

I’m less confident than at any point in this campaign that Romney will be the Republican nominee or that, even if he does, he’ll be able to defeat Barack Obama come November. But I remain quite sure that, if Romney loses, it won’t be for a lack of ability to spend money.