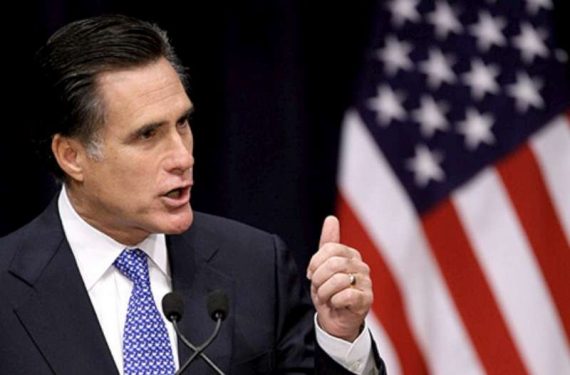 To the surprise of nobody, Mitt Romney is now officially the nominee of the Republican Party for President of the United States:

TAMPA –Mitt Romney became the Republican nominee for president on Tuesday afternoon, passing the required threshold of 1,144 delegates in a roll-call vote of convention delegates here.

“Mitt! Mitt! Mitt!” the convention crowd chanted afterward. More than 160 other delegates went to other candidates. Many of Romney’s rivals had released their delegates to vote for the presumed nominee.

In the final tally, Romney ended up with more than 2,000 delegate votes with roughly 200 votes being cast for “others,” with most of the “other” being votes for Ron Paul from various state delegations, including Iowa where the majority of the votes went to Paul. Under the rules governing the convention, however, Paul’s votes were not officially counted in his favor because he did not have the support of a plurality of delegates from at least five states. One of the “other” votes, though, actually went to Buddy Roemer, the former Louisiana Governor and Congressman who ran a quixotic campaign for the Presidency that essentially began and ended in New Hampshire.

Some cable commentators this afternoon have expressed the opinion that failure to officially count Paul’s votes could result in bad blood between the GOP and the Paul supporters, but it seems pretty clear to me that they were making these comments without any knowledge of what the GOP’s nomination and convention voting rules actually are. Of course, this isn’t the only conflict between convention organizers and Paul supporters:

[T]he usual happy choreography of a convention roll-call came on a day of headaches for GOP bosses. Unhappy supporters of Texas Rep. Ron Paul, another presidential candidate, booed and chanted as the party adopted rules that could weaken their power in future elections. During the roll call, Ron Paul supporters from Nevada gave their five delegates to Romney with obvious reluctance.

When those rules were put to the convention for a vote, Paul supporters shouted “No,” and “Seat Maine now!” They shouted down one speaker, and forced Republican party chairman Reince Priebus to wield his gavel and demand order.

“The ayes didn’t have it!” Jon Burrows, a delegate from Texas, said after one of the votes. “They’re just railroading this thing through.”

These moments are unlikely to prove a major distraction for the convention: network TV cameras will not turn on until 10 p.m.

But they signal a problem that is likely to reappear: supporters of Paul, a Texas congressman, have entered local Republican parties in large numbers. Their goal was to push the party toward Paul’s libertarian ideals, and possibly toward his son, Sen. Rand Paul (R-Ky.). But the mainstream party member seems unwilling to give Paul’s backers the power they want.

The day’s session began at 2 p.m. Even before then, however, there were signs of the un-mended rift between Romney’s supporters and the minority of delegates supporting Pau .

Paul arrived on the convention floor with a great stir, and his supporters and Romney’s shouted at each other. “Let him speak!” Paul supporters said, referring to the decision to keep Paul away from the convention podium. “Romney!” others chanted back.

Paul’s supporters are annoyed with proposed rule changes that might weaken their power in the next election cycle. The rule changes would weaken state-level party conventions, small gatherings where Paul supporters have had more success than in popular votes.

“They’re trying to stage a coup and make the grassroots completely irrelevant for the future,” said alternate delegate and Paul supporter Jeremy Blosser, 36, of Fort Worth, Texas, wearing his delegation’s white cowboy hat as he waited for the opening gavel early Tuesday afternoon. A lot of people, he said, “are upset about these credentials shenanigans.”

Surprisingly, the rules fight was far less contentious than many thought it would be. There were reports on Twitter that opponents of the new rules had obtained sufficient signatures to present a minority report out of the Rules Committee, but that never materialized and the only thing that happened when the Rules Committee report was voted on was a somewhat raucous demonstration by opponents of the new rules, which was countered by a similarly raucous demonstration by Romney and party supporters. Those hoping for a floor fight were disappointed.

Romney’s nomination may seem pro forma, but it has at least one important legal consequence. As of this afternoon, the Romney/Ryan campaign is now legally authorized to begin spending the approximately $186 million it has in the bank for the General Election campaign. That, I think, is the real reason the GOP decided to go ahead and do the nomination process out of its traditional order, so they could start pouring money into production companies and such and get ads ready that will be on the air as soon as the Democratic National Convention beings next Tuesday.

The battle has begun, get the popcorn.

Update: In an a similarly pro forma vote, the convention delegates have nominated Paul Ryan as the nominee for Vice-President of the United States.