Romney's VFW speech was filled with tropes and bromides but nothing that should raise eyebrows. 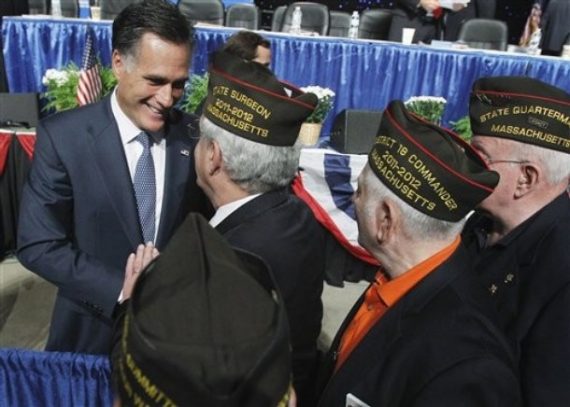 When Steven Metz tweeted, “I’m generally open to Romney but this nonsense lowered him a notch in my eyes,” I had visions of Rudy Guiliani’s batshit insane foreign policy manifesto. Thankfully, it was instead a series of tried-and-true tropes along with some careful hedging.

“We stand near the threshold of profound economic misery. Four more years on the same political path could prove disastrous,” Romney, a candidate for the Republican presidential nomination, said in an address before the Veterans of Foreign Wars national convention. “Unfortunately, when we look around the world today, we see a muddled picture of American’s foreign policy and our power.”

Pretty much every candidate running against an incumbent president says something of the like. And Joint Chiefs Chairman Mike Mullen used to say the impact of the weak economy on American power was his chief security concern.

“Have we ever had a president who was so eager to address the world with an apology on his lips and doubt in his heart?” Romney said. “He seems truly confused not only about America’s past but also about its future.”

This is largely nonsense but a venal sin rather than a cardinal one. Even some of us who don’t take our talking points from Rush Limbaugh grumbled a bit about the “apology tour” in Obama’s early weeks. But that’s gone away as he’s settled into office.

“Now I am a conservative businessman,” Romney said. “I have spent most of my life outside politics, dealing with real problems in the real economy. Career politicians got us into this mess and they simply don’t know how to get us out.”

The line drew hearty applause, but it was unclear how many in the audience interpreted it as a swipe against Perry, who has held elective office since 1984.

“In Afghanistan, the president has chosen to disregard the counsel of the generals on the ground,” Romney said. “I don’t know of a single military adviser to President Obama who recommended the withdrawal plan that he’s chosen, and that puts the success of our soldiers and our mission at greater risk.”

This is perhaps the most egregious line in the speech. We have civilian control of the military; the generals give their advice to the commander-in-chief, who makes the calls–it ain’t the other way around. But this trope–hiding behind the generals when they support you–has been around long enough that it’s hard to get upset when it’s invoked on the campaign trail.

The Libya mission, he said, “was marked by inadequate clarity of purpose” and “ongoing confusion.”

“When a president sends our men and women into harm’s way, he must first explain their mission, define what it means to be successful, plan for their victorious exit, provide them with the best weapons and armor in the world, and properly care for them when they come home,” Romney said. “Anything less is not befitting a great nation.”

I agree with all that. Hell, who doesn’t? But, aside from inadequately explaining the mission–and frankly pretending that the United States was doing much less than it actually was in Libya–President Obama did all this.

In one of his biggest applause lines, Romney said, “To win this fight for America’s future, we’re going to have to rise above politics. When members of SEAL Team Six boarded their helicopters, they did so not as Republicans or Democrats, and the final image that Osama bin Laden took with him straight to hell was not a party symbol — not a Republican elephant or a Democratic donkey — but an American flag on the shoulder of one straight-shooting U.S. Navy SEAL.”

This is a great line. But, in fairness, senior Obama administration officials were saying almost exactly the same thing after the raid. They’ll no doubt make getting Osama an applause line in their stump speeches–as any incumbent president would–but the president has never claimed he deserved more credit that the SEALs. (Not that Romney is claiming otherwise; but it could be interpreted that way.)

Romney criticized Obama’s plan to cut military spending by $400 billion over the next 12 years, as well as a budget trigger established in the debt deal reached this summer that could result in defense spending being cut by $850 billion.

Romney also talked about the “enormous waste” he says is in the Pentagon budget.

“As a conservative businessman who spent most his life in the private sector, I look at that kind of inefficiency and bloat and I say, ‘Let me at it,’ ” Romney said. “I will slice billions of dollars in waste and inefficiency and bureaucracy from the defense budget. And I’ll use the money we save for modern ships and planes, and for more troops. And I’ll spend it to ensure that veterans have the care they deserve.”

The “waste and inefficiency” business is tiresome, in that candidates have been pointing to it for decades and it never seems to get any smaller. And, even as wasteful as the Pentagon’s mammoth budget is, there’s not enough inefficiency to avoid hard choices. The business about taking care of veterans puts him at odds with a large chunk of House Republicans and the Tea Party.

Now, maybe Stephen Saideman is right and this is a function of the Bush administration having drastically lowered expectations. But, judging from this at least, I see no red flags that would make me leery of Romney as commander-in-chief. It took one essay about this time four years ago to write off Giuliani; thus far, Romney is still well within the mainstream as a contender to run the nation’s foreign policy.