A discussion in the comments thread of my "Time Running Out For GOP?" post led me to a post from four-plus years ago by frequent commenter and erstwhile blogger* Michael Reynolds titled "Money, Bombs and Jesus." 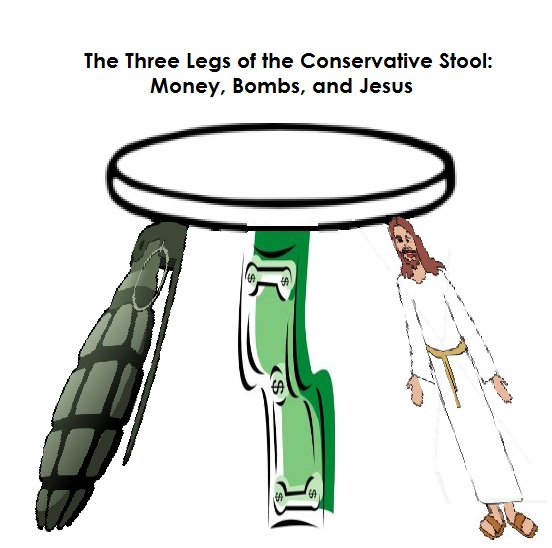 A discussion in the comments thread of my “Time Running Out For GOP?” post led me to a post from four-plus years ago by frequent commenter and erstwhile blogger* Michael Reynolds titled “Money, Bombs and Jesus.” Given its age and the defunctness of the blog*, I’m going to excerpt generously:

Since the time of Saint Ronald of Reagan, the GOP has been a three-winged bird.

First, and foremost, there was the Money! wing of the party. Their political philosophy was quite sophisticated and subtle, but to give you the short version it was, Money: More!

Actually, that’s the long version, too.

Next came the faction of the party primarily concerned with foreign policy. Originally the foreign policy in question was anti-communism. Then the wall fell and for a few years this wing of the GOP could be found curled up in a corner, shivering and nursing a Stoli. Then, thank God, Islamic terrorism reared its nasty head and gave the former cold warriors a new lease on life.

This is the Bombs! faction of the GOP. They do a lot of heavy thinking, write lots of white papers, and practice their chin-jutting pilates moves. Their core belief is, Bombs: Good.

Finally, there were the hillbillies. Sorry, I mean the evangelicals. By which I mean stupid people. No, wait, that was unkind. I shouldn’t have said stupid people. I should have explained that we’re talking about people who think a mating pair of T. Rex’s climbed on some old Hebrew’s boat alongside sheep, cows and goats. And later disembarked. And that the sheep, cows and goats who had bunked with the lovely Tyrannosaurus couple likewise disembarked. So, stupid people.

In any event, the Money! wing of the GOP and the Bombs! wing of the GOP knew they couldn’t win national elections so they forged an alliance with the Jesus! wing, on the understanding that Money! and Bombs! would pretend to give a shit about whatever nutbar fixation the Jesus! wing had up its ass that cycle. And then Money! and Bombs! would have a cruel laugh at the expense of the Jesus! wing, and get on about the important business of lining their pockets and blowing shit up.

Well. It worked great until George W. Bush. Mr. Bush was the living embodiment of the Money! Bombs! Jesus! trinity. He loved the money, he loved the bombs, he loved the baby Jesus, all three with equal sincerity. And, lo! Under his leadership the people came together as one to answer the question of our age: “Is this jackass the worst president of modern times, or only the second worst?” He flew like a three-winged bird.

But, alas, the hillbillies evangelicals quit playing along. Not so much in 2008, as it turned out, as they dutifully let John McCain have the nomination. Or, Mike Huckabee scared the Money and Bombs factions of the party enough that they rallied behind McCain. Regardless, between the implosion of Rudy Giuliani and the sheer lacklusterosity of Fred Thompson, it was all but over by this time in 2008. This cycle, alas, Rick Santorum–who makes Huckabee look like someone who might on occasion dance and perhaps have a sip of beer now and again–looks to be hanging around for quite some time.

I still have hopes that the other factions of the party will prevail and Romney will win. (And fantasies of, if that fails, Santorum taking an ass-whipping so severe in November as to create a realignment within the party.) But the evangelicals have certainly hijacked (or, in fairness, reclaimed) the label “conservative.” And perhaps the party that has treated them as useful idiots for three decades.

_______
*Apparently, he’s making millions writing for people who buy his books rather than pennies writing in his own space and selling advertising. The bastard.