MORAL EQUIVALENCE? Our side has captured folks, too: 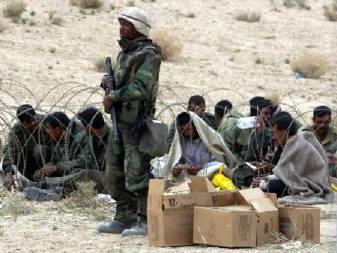 A U.S. soldier guards a group of Iraqi prisoners of war in the Iraqi town of Safwan on the Kuwaiti border March 22, 2003 after they surrendered without a struggle the day before. After pounding Baghdad with a fearsome night blitz, U.S. and British forces made their first day-time air strikes on Saturday and advanced on Iraq’s second city of Basra. REUTERS/Chris Helgre 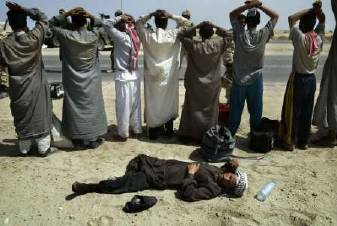 An exhausted Iraqi man lays behind other being searched by U.S. Marines as they were briefly detained after coming close to a marine position in desert in southern Iraq March 23, 2003. Iraqi troops pinned down U.S. and British forces in several places on Sunday, but the invaders said they would not be deflected from driving on to Baghdad. REUTERS/Damir Sagolj 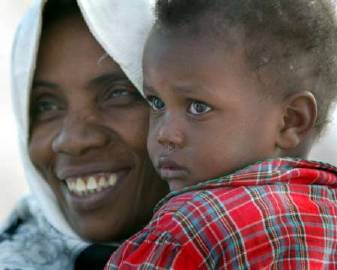 A Sudanese mother carries her daughter at a camp managed by the Red Cross and the Red Crescent, about 60 km (38 miles) away from the Iraqi-Jordanian border near Ruweished, March 23, 2003. By the end of Sunday only 200 refugees – mainly Sudanese – who fled the war in Iraq will be left at the camp in the Jordanian desert. Most of the refugees left towards their home countries after spending only one or two nights at the camp. REUTERS/Gleb Garanich
FILED UNDER: Iraq War, Baghdad, Iraq, Red Cross, Reuters