Matt Yglesias discovers that some people make a whole lot of money and stumbles on a novel idea.

Why not more brackets with slightly higher rates at $450,000 and $550,000 and $650,000 and so on and so forth up the spectrum? People who start earning this kind of big-time CEO money would, I think, almost literally not miss the money.

I doubt it very much that the government’s taking half or more of a very large amount of money would go unnoticed.

We had tax brackets as high as 90 percent until John Kennedy led an effort to cut them. The top bracket was upwards of 70 percent when Ronald Reagan took office and led an effort to cut them. Both efforts were good for both the general economy and for tax revenues. I’m not one who believes that we should continue chipping away at rates indefinitely on the basis that doing so will actually bring in more revenue.  There’s a point where diminishing returns kick in, although I won’t claim to know precisely where it us.

Some progressivity in the tax system is necessary to run a government as big as the citizenry have collectively demanded.  A truly flat system generating that much revenue would simply take too large a share of the income of those on the bottom.  (One could still have a flat nominal rate but generous standard deductions.)  But, at some point, it becomes punitive.

Beyond that, though, a more fundamental question exists:  How much of a claim on people’s earnings does the state have?  The top bracket, which kicks in for individuals or couples at $372,950, is 35 percent.  Over a third right off the top.  Why isn’t that enough? 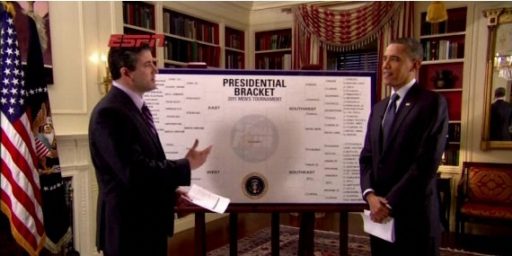