Anne Applebaum has an interesting take on the controversy in the UK and the Continent over the requirement that Muslim women show their faces in public. While mentioning the high level arguments over religious toleration and respect for the rights of women that has characterized much of the public debate on the matter, she says there is a more simple cultural issue:

[A]t a much simpler level, surely it is also true that the full-faced veil — the niqab, burqa or chador — causes such deep reactions in the West not so much because of its political or religious symbolism but because it is extremely impolite. Just as it is considered rude to enter a Balinese temple wearing shorts, so, too, is it considered rude, in a Western country, to hide one’s face. We wear masks when we want to frighten, when we are in mourning or when we want to conceal our identities. To a Western child — or even an adult — a woman clad from head to toe in black looks like a ghost. Thieves and actors hide their faces in the West; honest people look you straight in the eye.

Given that polite behavior is required in other facets of their jobs, it doesn’t seem to me in the least offensive to require schoolteachers or civil servants to show their faces when dealing with children or the public. If Western tourists can wear sarongs in Balinese temples to show respect for the locals, so too can religious Muslim women show respect for the children they teach and the customers they serve by leaving their head scarves on, but removing their full-faced veils.

It would, of course, be outrageous if Tony Blair or the French government were to ban veils altogether — just as it is outrageous that Saudi Arabia bans churches and even forbids priests from entering the country. But just because authorities persecute Christians and Jews in some parts of the Muslim world, that doesn’t mean we need to emulate them. In their private lives, Muslim women living in the West should be free to use veils or head scarves as they wish. But freedom to practice religion in the West shouldn’t imply freedom to hold jobs that impinge on that practice. An Orthodox Jew should not have an absolute right to work in a restaurant that is open only on Saturdays. A Quaker cannot join the Army and then state that his religion prohibits him from fighting. By the same token, a Muslim woman who wants to cover her face has no absolute right to work in a school or an office where face-to-face conversations are part of the job.

It isn’t religious discrimination or anti-Muslim bias to tell her that she must be polite to the natives, respect the local customs, try to speak some of the local patois — and uncover her face.

It’s an interesting feature of Western culture that we tend to be careful not to offend when traveling abroad, often curtailing very natural behaviors if we’re aware that they offend local sensibilities, and yet feel the need to accept alien cultural behavior even from those who chose to make permanent residence among us. Yet, while we intellectually believe that Muslims and Sikhs should be free to wear their native garb and that Latinos should be able to access government services in their language, these things go against our visceral sensibilities.

Applebaum is ultimately right: It is the domestic culture that should prevail. If it is common decency to respect local sensibilities when traveling, it is all the more true for those who have decided to make their home outside their native land. When in Rome and all that.

UPDATE: Daled Amos argues that the “politeness” compromise will not work:

Muslims are not going to see the wearing of a veil as anything less than an absolute value that cannot be negotiated and must be respected. Moslems have no concept of Dina D’Malchuta Dina (the law of the land is the law), allowing for compromise when the country’s law does not conflict with religious law. They make no such distinction and do not see the wearing of the veil as mere custom. To them the Saudi ban is correct–at the same time that the British and French ban is an insult.

A fair point, although one needs modifers before Muslims/Moslems in each instance. Many if not most Western Muslims manage to observe D’Malchuta Dina without much trouble regardless of what the letter fo the Koran says. Amos is right, though, that the fundamentalists see no such distinction between public and private. 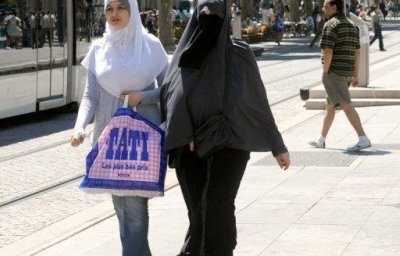