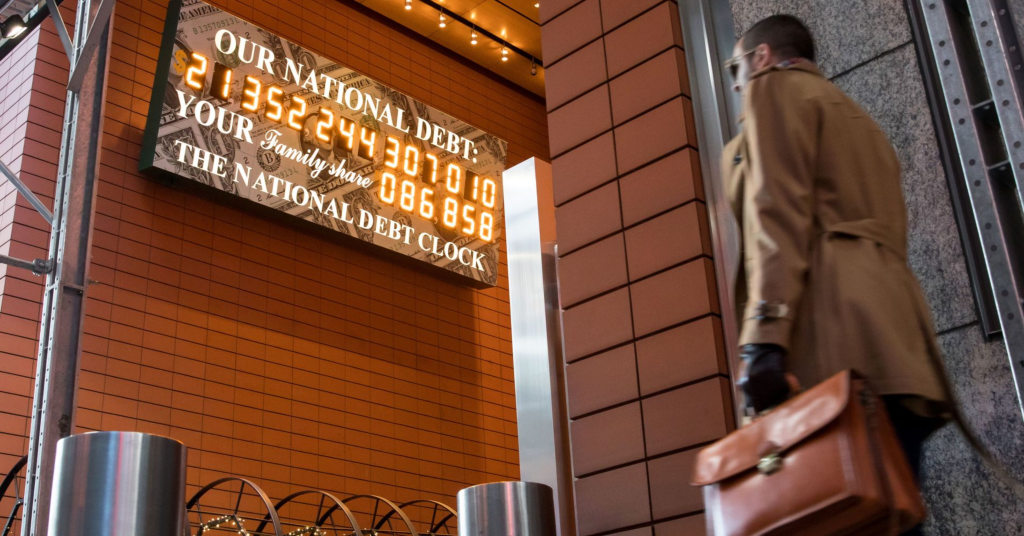 After two years of the Trump Presidency and Republican control of Congress, the National Debt stands at $22 Trillion:

The U.S. government’s public debt is now more than $22 trillion — the highest it’s ever been. The Treasury Department data comes as tax revenue has fallen and federal spending continues to rise. The new debt level reflects a rise of more than $2 trillion from the day President Trump took office in 2017.

Despite being in the second-longest economic expansion since the post-World War II boom, the U.S. is projected to rack up annual deficits and incur national debt at rates not seen since the 1940s, according to the Congressional Budget Office.

Over the next 10 years, annual federal deficits — when Congress spends more than it takes in through tax revenues — are expected to average $1.2 trillion, which would be 4.4 percent of gross domestic product. That’s far higher than the 2.9 percent of GDP that has been the average for the past 50 years.

“Other than the period immediately after World War II, the only other time the average deficit has been so large over so many years was after the 2007-2009 recession,” the CBO said last month.

On Jan. 20, 2017, the total amount of outstanding public debt was $19.9 trillion. On Monday, it surpassed $22 trillion. That’s despite Trump saying in August of last yearthat new tariffs on imported goods would let the U.S. “start paying down large amounts” of the national debt.

“The president is very much aware of the realities presented by our national debt,” White House budget director Mick Mulvaney said last October, when the government said the federal deficit had ballooned to $779 billion in the most recent fiscal year.

Mulvaney said the deficits would be offset by gains in economic growth; he also called on Congress to rein in what he called “irresponsible and unnecessary spending.”

During the campaign, of course, the growth of the national debt under President Obama, much of which was attributable at least in part to the impact of the Great Recession and the results of the spending on two wars and significant new social welfare programs during the Bush Administration was a frequent target of then-candidate Trump. In 2015, for example, Trump noted the increase in the national debt under his predecessor, predicting it would “bankrupt” the country. Later in the campaign, he said that the massive increase in the national debt could only be solved by someone with his experience and acumen. Instead, he has presided over an increase of more than 10% in the national debt after just two years in office and is on pace to see the debt under his tenure double if he manages to get re-elected in 2020 and to reach at least $25 trillion if he ends up being only a one-term President.

All of this is happening, of course, at the same time that we are on course to return to an era where the Federal Budget Deficit hits $1 trillion on an annual basis. The last time we saw this was in the early years of the Obama years, when the record deficit could largely be attributed to a combination of reduced government revenue due to the Great Recession and the increased spending created by President Obama’s stimulus package, which in any case didn’t even become law until we were already at the point where the recession was ending of its own accord. In any event, thanks in part to the fact that the economy started to grow again and in part to the fact that Republicans taking control of the House in the 2010 elections meant that the powers-that-be in Washington were forced to the bargaining table when it came to the budget deficit. This resulted in a number of changes to the budget process, including most notably the Budget Control Act of 2011, which aimed to control discretionary non-entitlement spending via sequestration and other means. As a result of these factors, the trillion-dollar deficits disappeared and the budget deficit returned to at least somewhat more normal levels.

All of that changed when Republicans completed their quest to control the House, Senate, and White House in 2016. This time, the record-setting deficits that we are likely to see for the foreseeable future are coming at a time when the economy continues to boom during what has become one of the longest economic recoveries in history, and they come at a time when financial markets are becoming increasingly sensitive to higher levels of debt and interest rates. When the final budget deal for Fiscal Year 2018 was put forward in mid-February of last year, it included massive spending increases in almost every budget category and busted through the controls that had been put in place by the Budget Control Act of 2011. As The New York Times noted at the time, this effectively means that Republicans have learned to love the deficits and debt they once claimed to abhor. In other words, the Republican Party, which had spent the Obama years railing about spending and deficits, had become the party of deficits and debt. By April of last year, the Congressional Budget Office had officially forecast that we’d be seeing trillion dollars deficits by the end of Fiscal Year 2019 and just a few months later, the national debt crossed a new benchmark and was north of $21 trillion. Now, less than a year later we’re at $22 trillion. So much for Republicans and fiscal responsibility, huh?

Republicans allegedly weren’t planning on this, or at least that’s what they claim. They believed that the tax cut passed at the end of 2017 would boost the economy and create new jobs in such numbers that it would lead to significantly larger revenue for the Federal Government. So far, that doesn’t appear to be happening. While we’ve seen some good news in the Gross Domestic Product and jobs numbers recently, they haven’t been anywhere near GOP projections and, overall, the economy isn’t really growing at a much faster pace than it was during the last few years of the Obama Administration. Moreover, the economy is projected to slow down after 2020 if not sooner due to a number of factors including the length of the recovery from the Great Recession, which is close to being the longest in American history and will pass the length of recovery that lasted from 1991 to 2001 in about four months. (Source), as well as the impact of higher interest rates.  Finally, the Congressional Budget Office recently estimated that Federal spending will rice from its current level of 20.8% of Gross Domestic Product to 23% by 2029, in no small part because of increases in Social Security and Medicare obligations made necessary by an aging population. All of that points to the deficit and the debt getting worse, not better, in the coming years.