NATO in an Age of Austerity

World Politics Review has published a special issue on "NATO's Identity Crisis" ahead of next month's Lisbon summit and the unveiling of a new Strategic Concept. I contributed the lead essay, "NATO in an Age of Austerity." 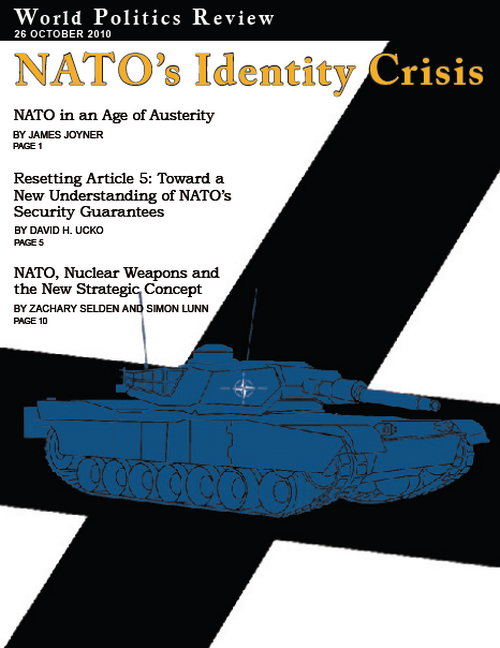 World Politics Review has published a special issue on “NATO’s Identity Crisis” ahead of next month’s Lisbon summit and the unveiling of a new Strategic Concept. I contributed the lead essay, “NATO in an Age of Austerity.”

The 3500-word article can be accessed at the link above.  The essence of the  article is that the global recession is forcing the key European Allies to make major cuts in their defense budgets, widening an already huge capabilities gap with the United States and bringing into question the value and viability of the 60-year-old institution. The cuts coincide with what Julian Lindley-French has termed a Great European Defense Depression, where a case for armed forces and the use of force has been profoundly damaged, and a growing sense in Washington that Europe is of decreasing importance.

The best-case scenario is for austerity to force a wholesale rethinking of how Europe manages its defense posture, with decisions made as an Alliance rather than piecemeal, coordinating cuts and acquisitions in such a way as to avoid duplication of effort and ensure that all necessary bases are covered. The promising negotiations currently underway between France and the United Kingdom offer a ray of hope for this outcome.

Over the past few months, dozens of high-level discussions with insiders either working on or close to the negotiations for the new Strategic Concept have offered little reason to question Kurt Volker’s previously cited observation about NATO’s “lack of unified commitment and vision.” Virtually every contentious issue appears to be still up in the air as of this writing, less than a month from the Lisbon summit at which it will be finalized.

Far from being the grand unifying vision for a renewed alliance that was imagined as recently as a year ago, the final document will essentially be a punt. The assembled ministers will agree on some vague language about working together on a variety of listed tasks, while articulating little in the way of substance that might bind the alliance together.

Given the current environment, that’s not such a bad outcome. Ultimately, NATO’s continued existence, even without a shared vision on future missions, is important in its own right. As Ramsussen recently observed, “There is no place but NATO where Europe and North America sit together every day to assess the security issues that affect us, and figure out how to tackle them together.” Even though no pressing security threat exists today that might unify the alliance in the same way that the Cold War-era threat of nuclear annihilation did, the NATO allies continue to share interests and values that will, from time to time, require collective action to defend. And when that time comes, they must be prepared to do so.

More at the link.  If you’re not already a subscriber, you’ll need to register.  Or you can click over from the Atlantic Council version of this post, since the domain is whitelisted through.

Also see the companion pieces, “Resetting Article 5: Toward a New Understanding of NATO’s Security Guarantees,” by David Ucko of Kings College and “NATO, Nuclear Weapons and the New Strategic Concept” by Zachary Selden,  deputy secretary-general for policy of the NATO Parliamentary Assembly, and Simon Lunn of the Geneva Center for the Democratic Control of the Armed Forces.