Navy SEAL’s Dog Is Loyal To The End 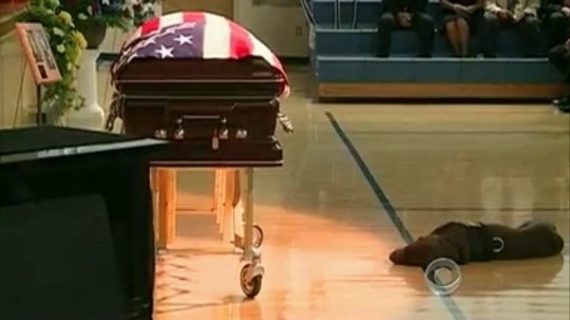 The funerals of the SEALs and other American soldiers killed in the Chinook crash in Afghanistan have been taking place across the country. They’re all sad in their own way, but there was one that just stands out:

Navy SEAL Jon Tumilson lay in a coffin, draped in an American flag, in front of a tearful audience mourning his death in Afghanistan. Soon an old friend appeared, and like a fellow soldier on a battlefield, his loyal dog refused to leave him behind.

Tumilson’s Labrador retriever, Hawkeye, was photographed lying by Tumilson’s casket in a heart-wrenching image taken at the funeral service in Tumilson’s hometown of Rockford, Iowa, earlier this week. Hawkeye walked up to the casket at the beginning of the service and then dropped down with a heaving sigh as about 1,500 mourners witnessed a dog accompanying his master until the end.

The photo was snapped by Tumilson’s cousin, Lisa Pembleton, and posted on her Facebook page in memory of the San Diego resident. Tumilson, 35, was one of 30 American troops, including 22 Navy Seals, who was killed when a Taliban insurgent shot down a Chinook helicopter with a rocket-propelled grenade on Aug. 6.

“I felt compelled to take one photo to share with family members that couldn’t make it or couldn’t see what I could from the aisle,” Pembleton wrote on her Facebook page. “To say that he was an amazing man doesn’t do him justice. The loss of Jon to his family, military family and friends is immeasurable.”

Hawkeye was such a huge part of Tumilson’s life that Tumilson’s family followed the dog down the aisle as they entered the service in front of a capacity crowd in the gymnasium at the Rudd-Rockford-Marble Rock Community School. Hawkeye then followed Tumilson’s good friend, Scott Nichols, as Nichols approached the stage to give a speech. As Nichols prepared to memorialize his friend, Hawkeye dutifully laid down near the casket.

Here’s the report from the local CBS television station:

Pardon me, there’s something in my eye.