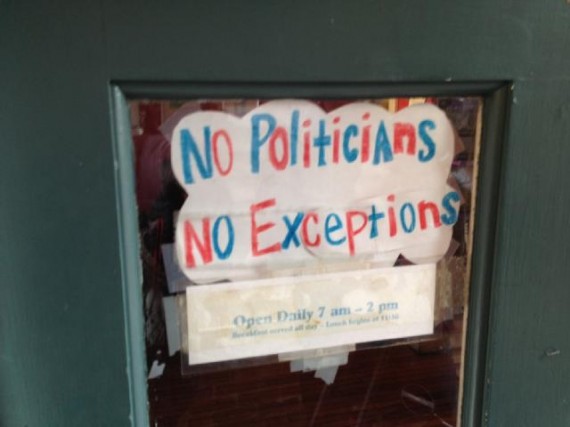 At least one New Hampshire restaurant doesn’t want any of those politicians showing up:

PORTSMOUTH, N.H. — It’s common for presidential candidates to make the rounds at New Hampshire restaurants, but one has had enough of the visits.

The sign at the entrance of Colby’s Breakfast & Lunch in Portsmouth reads “No Politicians, No Exceptions.”

Employee Jessica Labrie told the Portsmouth Herald she made the sign after several customers complained that the visits were an interruption.Labrie said several GOP presidential candidates, including Texas Gov. Rick Perry, former candidate Michele Bachmann and former Louisiana Gov. Buddy Roemer have visited the business since the summer, and each time their presence was an interruption.

She said the most recent candidate visit came Monday from Roemer. She said it disrupted conversations among people eating breakfast

Can we put one of those signs up in front of the U.S. Capitol?
FILED UNDER: Campaign 2012, US Politics, Louisiana, Michele Bachmann, New Hampshire, Rick Perry, Texas