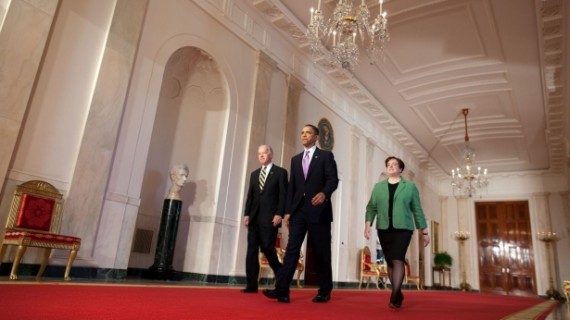 With just over two weeks to go before the Senate Judiciary Committee gavels her confirmation hearings to order, a new poll shows that Elena Kagan enjoys majority support for her confirmation:

Nearly six in 10 Americans say the Senate should vote to confirm U.S. Solicitor General Elena Kagan’s nomination to the Supreme Court, but most also want her to answer questions about how she would have decided past cases and to reveal her stand on legal abortion.

At 58 percent in the new Washington Post-ABC News poll, public support for Kagan’s confirmation is on par with that for now-Justice Sonia Sotomayor when she was tapped last year as President Obama’s first nominee for the court. About a quarter, 24 percent, oppose Kagan; 18 percent express no opinion.

Democrats overwhelmingly back the president’s pick, who would become the third woman serving on the nine-justice court, as do independents, by about a 2 to 1 ratio. More than a third of Republicans also support Kagan’s confirmation, putting her cross-party support exactly where Sotomayor’s was before her hearings started.

Last June, 36 percent of Republicans backed Sotomayor, with 43 percent opposed, precisely where Kagan’s Republican numbers are now. But in a poll taken a month later, as the Senate Judiciary Committee hearings on Sotomayor were wrapping up, GOP opposition to her confirmation spiked to 57 percent.

This year, Republican lawmakers are sure to ask Kagan’s opinions about past cases and will point to Kagan’s published support for a more open, lively exchange on constitutional issues. Nominees are generally reluctant to engage on this score, amounting to a process Kagan deemed a “vapid and hollow charade.”

In a 1995 book review, Kagan wrote about “the essential rightness — the legitimacy and the desirability — of exploring a Supreme Court nominee’s set of constitutional views and commitments,” and two-thirds of Americans say she should answer questions about how she would have ruled on past court cases. Majorities, though slimmer ones, said the same of Chief Justice John G. Roberts Jr. before his turn on the Senate stage.

Of course, Kagan won’t directly answer a lot of these questions, just as Roberts and most nominees before him going back to the Bork debacle.

And I’m not sure that we should expect Supreme Court nominees to do otherwise.

I’m still one of the few remaining people who thinks that, outside of extreme opinions, the only relevant question for Supreme Court nominees should be whether they are qualified for the job. Asking a nominee how they would rule on specific cases, or what their view of a specific precedent such as Roe v. Wade might be, borders on being entirely inappropriate and, if the nominee were to answer could be considered a breach of the Cannons of Judicial Ethics since it could be viewed as a pre-judging a particular case before examining the merits and legal arguments.

So, when Elena Kagan declines to say how she’d rule on, say, a lawsuit challenging the newly passed abortion restrictions in North Dakota and Oklahoma, or the various lawsuits challenging the health care reform law, or the Constitutional issues surrounding same-sex marriage, or any other number of issues that are bound to reach the Supreme Court during her tenure, I for one won’t complain.

FILED UNDER: Law and the Courts, US Politics, Elena Kagan, U.S. Supreme Court

Chief Justice Roberts: Neither Scalia Nor Ginsburg Could Get Confirmed Today