For the time being, there will be no overnight camping at Zuccotti Park 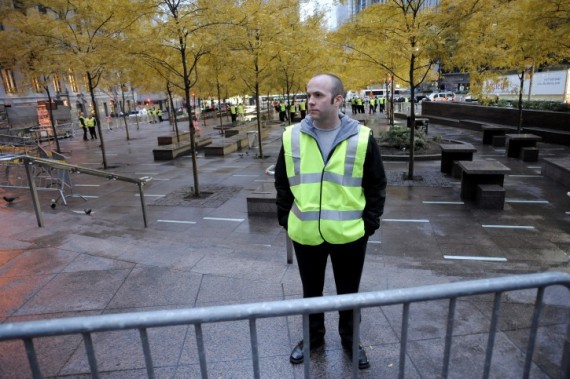 Much of the action over Occupy Wall Street today was taking place in New York State Supreme Court as protesters and their attorneys were attempting to get a Court Order permitting them to return to the park and camp out over night. That effort failed last this afternoon when a State Supreme Court Judge ruled for the city:

A judge backed up Mayor Bloomberg’s clean sweep of Zuccotti Park Tuesday, ruling that the city has the right to keep Occupy Wall Street protestors from camping out in what’s supposed to be a 24-hour open space for all of the public.

The ruling from the bench by Manhattan Supreme Court Justice Michael Stallman will likely be appealed so it’s not yet clear whether the city will reopen the park and allow in protestors – without tents.

The city had argued that the protestors had made the park unsafe and dangerous by erecting a warren of tents that made the place a firetrap and kept police from coming inside to enforce the law.

Lawyers for the protestors argued that the city unfairly infringed on their First Amendment rights, noting that the city has allowed others to pitch tents for flea markets in city parks for months at a time without police interference.

And here’s The New York Times’ take on the ruling:

Lawyers for the protesters had argued that the city and the owner of Zuccotti Park had impinged on the protesters’ free-speech rights. The lawyers took particular exception to the fact that the landlord, Brookfield Properties, had imposed rules for use of the park after the protests were underway.

“They issued these rules after the activity started in order to try to limit the activity,” said Arthur Schwartz, a lawyer representing the Transport Workers Union, the Working Families Party and New York Communities for Change, organizations that have joined in the protesters’ cause.

A lawyer for Brookfield said that the company had no problem with people expressing their First Amendment rights in the park. But the lawyer, Douglas H. Flaum, said the protesters needed to be removed because their tents and other equipment posed a safety risk. He also said they preventing other people from using the park.

“It is not meant to be a tent city,” Mr. Flaum said, adding that Brookfield would welcome the protesters back without the tents. “There are very specific health and safety concerns.” The mayor, at his news conference in the morning, read a statement he had issued around 6 a.m. explaining the reasoning behind the sweep. “The law that created Zuccotti Park required that it be open for the public to enjoy for passive recreation 24 hours a day,” the mayor said in the statement. “Ever since the occupation began, that law has not been complied with” because the protesters had taken over the park, “making it unavailable to anyone else.”

There’s likely to be an appeal, but that will take at least several days to be argued and I’m beginning to doubt that there’s much legal merit on the side of the protesters.

Here’s the decision, as I suspected Judge Stallman ruled that the rules imposed by the property owner and the city are a reasonable time, place, and manner regulation and thus permissible. I discussed the legal background behind these issues in an earlier post.