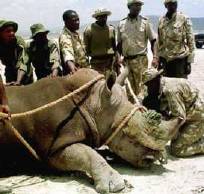 Write your own caption in the Comments below.

Update: By request, the “actual” caption: Kenya Wildlife Service game wardens prepare to relocate a captured rhino from Lake Nakuru national park in the heart of Kenya’s scenic Rift Valley to another game park in the northern part of Kenya, March 17, 2003. The exercise aims to revive the number of rhinos, which were nearly wiped out in poaching attacks years ago. Photo by Stringer/Afghanistan (news – web sites)/Reuters TO MATCH FEATURE BC-KENYA MOVES RARE RHINOS IN DART AND CAPTURE GAME. REUTERS – Apr 01 1:35 PM ET