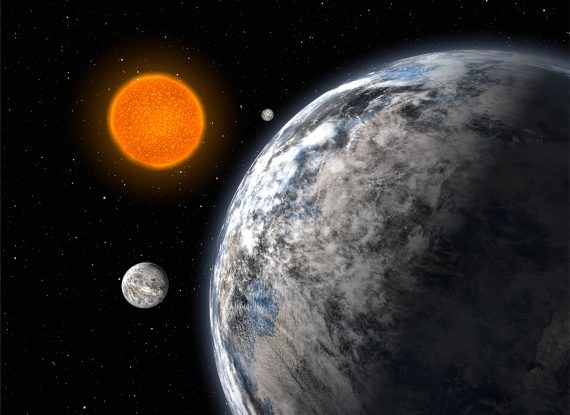 More success in the ongoing hunt for Earth-like planets in other star systems:

Astronomers on Monday announced the discovery of 50 new planets circling stars beyond the sun, including one “super-Earth” that is the right distance from its star to possibly have water.

“If we are really, really lucky, this planet could be a habitat” like Earth, said Lisa Kaltenegger of the Max Planck Institute for Astronomy in Heidelberg, Germany.

The planet, dubbed HD85512b, circles an orange star somewhat smaller and cooler than our sun about 36 light-years away. The star, HD85512, is visible in the southern sky in the constellation Vela.

The newly found planet circles this star every 59 days, putting it at the edge of the “habitable zone” where water could exist if atmospheric conditions were right.

In a teleconference, Kaltenegger said that the planet is at the warm edge of its star’s habitable zone, as if “standing next to a bonfire.” That means the planet would require a lot of cloud cover — which reflects starlight — to keep the surface cool enough to prevent any water from boiling, she said.

Sixteen of the new planets announced Monday, including the new super-Earth, are of the right mass to be made of rock instead of gas.

“We are building up a target list of super-Earths in the habitable zone,” Kaltenegger said.

To determine whether the planet has an atmosphere, astronomers need to capture an image of the planet — which they have not done — and analyze the light for signs of water, carbon dioxide and other gases. No existing telescope is sensitive enough for that task.

But a new telescope to begin construction next year, the European Extremely Large Telescope, will be up to the task, said Markus Kissler-Patig of the European Southern Observatory. It will be “technically capable of finding life around the nearest stars,” he said, by analyzing the atmosphere of exoplanets. The new super-Earth is a “prime target” for the new telescope.

Even discovering gases in the atmosphere won’t confirm life, of course, but it will be a pretty big clue that it exists. One of these days, we’re going to find that clue, and possibly more.