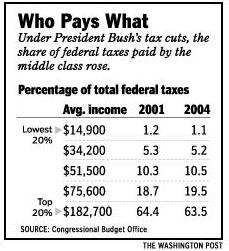 Since 2001, President Bush’s tax cuts have shifted federal tax payments from the richest Americans to a wide swath of middle-class families, the Congressional Budget Office has found, a conclusion likely to roil the presidential election campaign.

Fully one-third of President Bush’s tax cuts in the last three years have gone to people with the top 1 percent of income, who have earned an average of $1.2 million annually, according to a report by the nonpartisan Congressional Budget Office to be published Friday. The report calculated that households with incomes in that top 1 percent were receiving an average tax cut of $78,460 this year, while households in the middle 20 percent of earnings – averaging about $57,000 a year – were getting an average cut of only $1,090. The new estimates confirm what independent tax analysts have long said: that Mr. Bush’s tax cuts have been heavily skewed to the very wealthiest taxpayers. Those are also the people, however, who pay a disproportionate share of federal income taxes.

We actually commissioned a government study to demonstrate that, given an across-the-board tax cut, the people who pay the most taxes are going to get the biggest cut? That a guy who pays more than $57,000 a year in federal income taxes gets a bigger cut than a guy who only earns $57,000 a year? Really?

Further, if the guy making $57,000 a year gets a tax cut of $1090, does he really think it’s a tax hike because he’s now paying a slightly higher share of the overall tax burden than he once was?

UPDATE (1138): Sean Davis, a policy analyst for Senator Robert Bennett on the Joint Economic Committee (JEC) has a decidedly different take on the numbers, which he shares via electronic mail:

* As a result of the tax cuts since 2001, all taxpayers face lower effective federal income tax rates than they would have without the tax cuts.

* While many characterize the CBO report as evidence that the tax cuts shifted the burden of taxation to the middle class, CBO data show precisely the opposite effect. The tax cuts actually made the tax system more progressive. The highest 20 percent of earners now pay a larger share of federal income taxes than they would have without the tax cuts, while the share of income taxes paid by all other income groups fell.

* Some analysts cite total effective federal tax rates, as opposed to effective income tax rates, as the best measure of the effects of the tax cuts across income groups. This method can be misleading because it measures the burden of payroll taxes without accounting for the highly progressive Social Security and Medicare benefits to which payroll taxes are linked.

FILED UNDER: Economics and Business, Politics 101