Journalists have been following Maxwell Scott's advice since long before "The Man Who Shot Liberty Valance" was made. 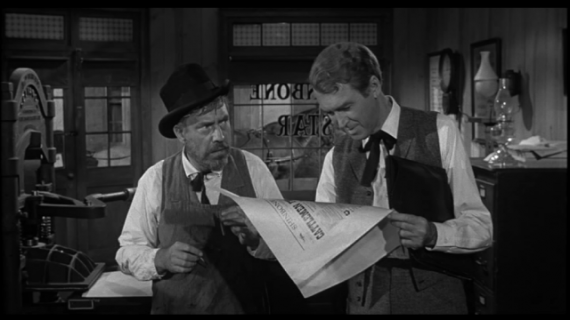 In a famous scene at the end of the 1962 classic “The Man Who Shot Liberty Valance,” editor Maxwell Scott explains why he’s not going to use a story that would destroy the myth upon which a politician’s career was built:  ”This is the West, sir. When the legend becomes fact, print the legend.”  A new book reveals just how true that exchange was.

Many of the landmark moments in American journalism are carefully nurtured myths—or, worse, outright fabrications.

These fables and more are lovingly undressed in W. Joseph Campbell’s persuasive and entertaining “Getting It Wrong.” With old-school academic detachment, Mr. Campbell, a communications professor at American University, shows how the fog of war, the warp of ideology and muffled skepticism can transmute base journalism into golden legend.

Mr. Campbell’s examples run from the Spanish- American War to Hurricane Katrina, with oddities like the feminist bra-burning at the Democratic Convention in 1964 sandwiched in between. In each case, the author teases out the grain of sand around which the pearl of the myth was spun.

Some of the myths were created after the fact by publicists and hagiographers, cemented in our minds through movies and other pop culture reinforcements. But some were directly attributable to journalistic decisions.

Welles also figures in the fable that his 1938 Martian-invasion radio show convulsed the nation. As Mr. Campbell tells it, newspapers spawned the myth by splashing scare headlines over thin stories. Radio was becoming a real competitor for news coverage, and the papers had a vested interest in smearing the new medium as irresponsible and sensationalist.

Mr. Campbell pins two of his myths directly on the Washington Post. The Jessica Lynch fable had its inception, he says, in a Post story based on intelligence sources who misinterpreted Iraqi battlefield reports. They somehow mistook Lynch for the real hero of the engagement, Sgt. Donald Walters, a cook in her unit who lost his life while single-handedly holding off Iraqi ambushers. The Post, Mr. Campbell says, was also a leading culprit in promoting the 1990s myth—based on the flimsiest of scientific evidence—that the infants of crack-smoking mothers were doomed to lives crippled by mental and physical problems.

The Post’s immortal Bob Woodward and Carl Bernstein also come under Mr. Campbell’s critical gaze. He argues that the myth of “the heroic journalist,” inspired by their Watergate-era reporting, obscures the reality that it took “special prosecutors, federal judges, both houses of Congress, and the Supreme Court, as well as the Justice Department and the FBI” to force Richard Nixon out. Journalism, in this reading, kept the scandal alive while the authorities did the real investigation and exposure of Nixon’s crimes.

Part of this is naked self interest and ego.  Most of it is reporters who are clueless about the subjects they cover, and thus predisposed to believe anything that makes for good copy.