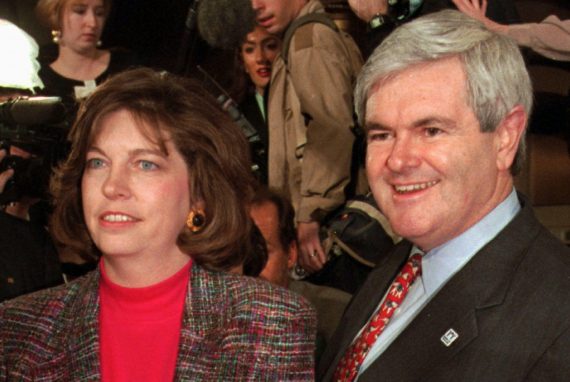 ** FILE ** Newt Gingrich poses with his wife Marianne during a Georgia salute to Speaker Newt Gingrich dinner in Washington in this Jan. 3, 1995 file photo. Former U.S. House Speaker Newt Gingrich is asking the Catholic Archdiocese of Atlanta for an annulment of his second marriage, which ended in divorce after 19 years. Gingrich’s second wife, Marianne Gingrich, said Thursday, May 9, 2002 through her attorney that she learned of the request this week when she received a letter from the archdiocese. (AP Photo/Marcy Nighswander, File) HOUCHRON CAPTION (05/11/2002): Newt Gingrich with ex-wife, Marianne.