The NFL owners voted unanimously to opt out of the current labour agreement with the players in 2010 rather 2013. If the parties don’t agree to a new deal, we would see the first season with no salary cap since 1993.

Both Upshaw and commissioner Roger Goodell were reasonably optimistic that an agreement could be reached before the start of the 2010 free-agent season, presumably in March of that year. If there is none, that would be the first season without a salary cap since the year after the 1993 labor contract was signed, ending more than a half-decade without labor strife.

[NFL Players Association executive director Gene] Upshaw suggested that once the cap went away, the union would never let one back. [Commissioner Roger] Goodell suggested that might be rhetoric — that the owners weren’t worried about playing without a cap and that some system would be put in place that could work.

There are, in fact, incentives to prevent even an uncapped season.

There are suggestions that the richer teams such as Washington and Dallas would spend millions on top free agents and build all-star teams.

On the other hand, the contract extends the length of time for free agency in an uncapped year from four years to six and allows teams to protect one extra player with franchise or transition tags. In addition, the two-year lag would allow many teams to extend the contracts of their most important players, maintaining the continuity that is important to winning teams.

The debate will continue in negotiations and through the media over a course of months and years. Both conceded there might be no agreement until the deadline, which Upshaw suggested might not happen until the winter of 2010. So did Goodell.

“We’d like to get things done,” Goodell said. “But often it’s not until you have a deadline that people realize the consequences of not reaching a deal.” Upshaw added: “March of 2010—that’s what we see as the realistic deadline. I’m not going to sell the players on a cap again. Once we go through the cap, why should we agree to it again?”

Obviously the owners know more than I do, but this seems like quite a gamble to me. The salary cap has been a significant contributor to the rapid growth of the NFL’s popularity in the last 15 years. But this has been coming for a while; owners pay ~60% of revenue to players even with the cap. But Upshaw doesn’t want a salary cap and he doesn’t want to limit rookie salaries, either, leaving one to wonder whether the players are willing to kill the goose that lays the golden eggs. 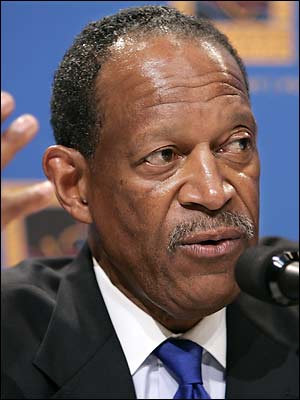