Nicholas Katzenbach, a central figure in the civil rights fights of the 1960s, has died. 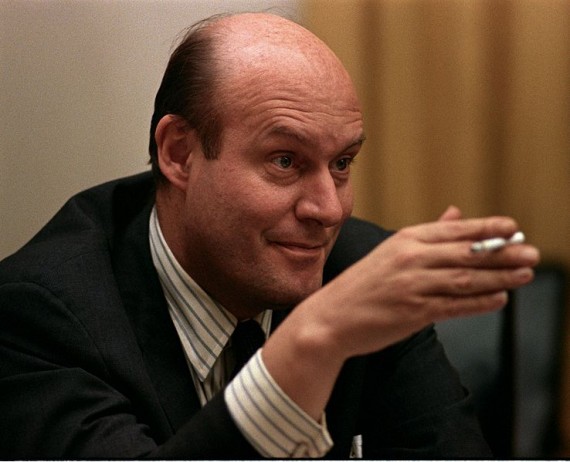 Nicholas Katzenbach, a central figure in the civil rights fights of the 1960s, has died. He was 90.

Nicholas deB. Katzenbach, who helped shape the political history of the 1960s, facing down segregationists, riding herd on historic civil rights legislation and helping to map Vietnam War strategy as a central player in both the Kennedy and Johnson administrations, died on Tuesday night at his home in Skillman, N.J. He was 90.

Mr. Katzenbach was one of the “best and the brightest,” David Halberstam’s term for the likes of Robert McNamara, McGeorge Bundy, Walt Rostow and other ambitious, cerebral and often idealistic postwar policymakers who came to Washington from business and academia carrying golden credentials. Mr. Katzenbach, an attorney general under President Lyndon B. Johnson, was the son of a New Jersey state attorney general, a Rhodes scholar, a law professor at Yale and the University of Chicago, and a war hero.

His government service virtually encompassed the issues of the ’60s. He advised President John F. Kennedy during the Cuban missile crisis, negotiated the release of Cuban prisoners captured during the Bay of Pigs invasion, and pushed for an independent commission to investigate the Kennedy assassination. He was Robert F. Kennedy’s No. 2 in the Justice Department and took on the pugnacious F.B.I. director J. Edgar Hoover over his wiretapping of the Rev. Dr. Martin Luther King Jr. Before Congress, he defended President Johnson’s escalation of the Vietnam War.

“Few men have been so deeply involved in the critical issues of our time,” President Johnson wrote to him when Mr. Katzenbach resigned as an under secretary of state on Nov. 8, 1968.

Perhaps his most tense moment in government came on June 11, 1963, when he confronted George C. Wallace on the steps of the University of Alabama in Tuscaloosa. Mr. Wallace was the Alabama governor who had trumpeted “segregation now, segregation tomorrow, segregation forever” and vowed to block the admission of two black students “at the schoolhouse door.”

Mr. Katzenbach, flanked by a federal marshal and a United States attorney, approached Foster Auditorium, the main building on campus, around 11 a.m. Mr. Wallace was waiting behind a lectern at the top of the stairs, surrounded by a crowd of whites, some armed.

“Stop!” he called out, raising his hand like a traffic cop.

Mr. Katzenbach read a presidential proclamation ordering that the students be admitted and asked the governor to step aside peacefully. Mr. Wallace read a five-minute statement castigating “the central government” for “suppression of rights.”

Towering over Mr. Wallace, Mr. Katzenbach, a 6-foot-2-inch former hockey goalie, was dismissive. “I’m not interested in this show,” he said.

The students were registered about four hours later.

I know of Katzenbach mostly because he was a named party (in his capacity as acting attorney general) in a landmark civil rights case called Katzenbach v. McClung, a 9-0 ruling which upheld provisions of the Civil Rights Act of 1964 prohibiting racial discrimination in privately owned public accommodations such as restaurants and hotels.

An interesting factoid from the NYT obit:

Mr. Katzenbach was educated at Phillips Exeter Academy in New Hampshire, where he played hockey, and Princeton, where he majored in international relations and public affairs. As a 19-year-old junior he drove to New York to enlist after the attack on Pearl Harbor. A month later he was commissioned a second lieutenant in the Army Air Corps and became a navigator on B-25 bombers. In 1943, on a mission over the Mediterranean, he was captured when his plane was shot down. (He was awarded an Air Medal and three clusters.) In prison camp in Germany he read, by his count, 400 books in 15 months.

I can’t imagine Princeton, or any university, allowing a student to test out of his senior year these days.

FILED UNDER: Law and the Courts, Obituaries, Quick Takes, Race and Politics