The United States is, in fact, doing the exact opposite. 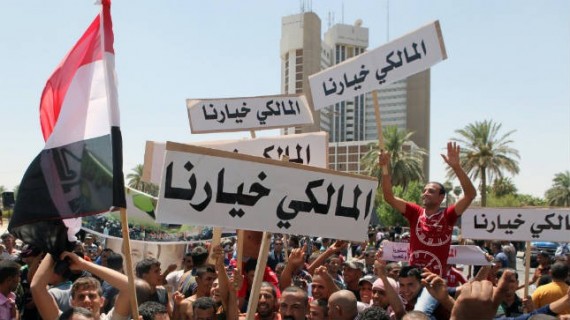 The White House on Monday took new diplomatic steps to force Iraq’s prime minister from power as it looked for ways to stop fighters with the Islamic State in Iraq and Syria (ISIS) from gaining a deeper foothold in the country.

In the calls, Biden conveyed President Obama’s congratulations and commitment to “a new and inclusive Iraqi government,” dealing a blow to Iraqi Prime Minister Nouri al-Maliki, who is clinging to power.

The calls left little doubt that Obama wants to push al-Maliki out the door and seek to unify Iraq’s Shiites, Sunnis and Kurds around a new leader as the U.S. seeks to stop gains by ISIS.

Al-Maliki has vowed to stay on. In an impromptu address over the weekend, he said he would go to federal court in a bid to stop Abadi’s nomination from going forward.

“What is happening today is a coup against the constitution, a deliberate violation of it by the president,” al-Maliki said.

Al-Maliki also ordered loyal militiamen to begin patrols within the streets of Baghdad in a show of force.

Those moves were denounced by the State Department, which, in a clear rebuke to al-Maliki, issued a statement rejecting “any effort to achieve outcomes through coercion or manipulation of the constitutional or judicial process.”

“There should be no use of force,” Secretary of State John Kerry said in Sydney, according to The New York Times. “No introduction of troops or militias into this moment of democracy for Iraq.”

“We believe that the government-formation process is critical in terms of sustaining the stability and calm in Iraq, and our hope is that Mr. Maliki will not stir those waters.”

It’s not just The Hill, either. The Daily Beast has a similar report titled, “Exclusive: Inside Obama’s Push for Regime Change in Iraq.”

In recent years, common usage of “regime” has been in description of authoritarian governments. One typically sees references to the “Saddam Hussein regime” in Iraq or the “Assad regime” in Syria but not to the “Merkel regime” in Germany or the “Reagan regime” in the United States—although occasionally the latter form is used by opponents to imply that elected governments are behaving in undemocratic or unsavory fashion.

But a regime is only synonymous with the current political leadership in an authoritarian state.  In Robert Fishman’s often-cited definition, “A regime may be thought of as the formal and informal organization of the center of political power, and of its relations with the broader society. A regime determines who has access to political power, and how those who are in power deal with those who are not.” He continues, “Regimes are more permanent forms of political organization than specific governments, but they are typically less permanent than the state.”

So, in the case of the United States, the current regime dates to the inauguration of George Washington as president under the Constitution of 1789. Forty-two men have held the office since but they’ve all done so through the processes established under the Constitution (as occasionally amended both formally and through custom, notably the evolution of how the Electoral College functions in practice). We’ve had incredibly bitter and contentious elections—and a bloody Civil War—but have handed off control of government according to our institutional processes this whole time. The last “regime change” in the United States, then, was when the Constitution replaced the Articles of Confederation. Before that, there was arguably a regime change when the Articles replaced British rule, although I’d argue that we established a new state rather than changed regimes.

In the case of Iraq, ascertaining the lines is admittedly more difficult. Wikipedia tells us that,

Iraq’s first constitution, which established a constitutional monarchy, entered into force under the auspices of a British military occupation in 1925 and remained in effect until the 1958 revolution established a republic. Interim constitutions were adopted in 1958, 1963, 1964, 1968, and 1970, the last remaining in effect de jure until the Transitional Administrative Law was adopted. In 1990, a draft constitution was prepared but never promulgated due to the onset of the Gulf War.

The current constitution was approved by a referendum that took place on 15 October 2005.

I would argue, then, that regime changes took place in 1925, 1958, and 2005. These represent true changes in governing systems—British rule, military-authoritarian rule, and something democracy-like. The last date is murky, in that the US-led Coalition ousted Saddam on 9 April 2003 and handed over power to a temporary Iraqi government shortly thereafter. There were even more-or-less legitimate democratic elections under the Transitional Administrative Law during that interim period. One could, then, reasonably argue that that constituted a “regime” as well.

Regardless, Iraq is still operating under the Constitution of 2005. So, in fact, the US government is backing the current regime against an apparent plan by the sitting prime minister to retain power through unconstitutional, perhaps event violent, means. That’s the exact opposite of regime change.