No, Shelia Jackson Lee Didn’t Call For “Martial Law” In the Sense That You Understand It

I’ve seen several conservative bloggers, most recently Bryan Preston at The PJ Tatler and a blogger at the notoriously paranoid Fox Nation, pick up on recent comments on the House Floor by Democratic Congresswoman Shelia Jackson Lee in which she talks about “martial law.” Paranoia being what it is on the right, and the existence of something called Google apparently being too hard for some to grasp, the immediate image that sweeps into the mind of those inclined to believe the worst about their political opponents is of tanks in the streets and the military on every corner.

First, here are the comments in question:

It is not the truth to suggest that there are not enough voters, members of Congress, that would vote right now today to open this government. It’s something called a continuing resolution, but it’s a bill that you put on the floor that has been passed already by Republicans and Democrats in the United States Senate. This is not an idea of anyone over another person. Republican and Democratic Senators have already voted for this clean bill that we can vote on today.We have martial law. What that means and my colleagues know what it means. It’s that you can put a bill on in just minutes.”

In reality, Lee was referring to a certain procedure in the House Of Representatives that allows bills to be “rushed” to the House floor:

Under the martial law procedure, long-standing House rules that require at least one day between the unveiling of significant legislation and the House floor vote on that legislation — so that Members can learn what they are being asked to vote on — are swept away. Instead, under “martial law,” the Leadership can file legislation with tens or hundreds of pages of fine print and move immediately to debate and votes on it, before Members of Congress, the media, or the public have an opportunity to understand fully what provisions have been altered or inserted into the legislation behind closed doors.

This link comes up first when you do a search for “martial law house of representatives.” (without the quotes) But, apparently, it’s too hard for some people to do some basic research. 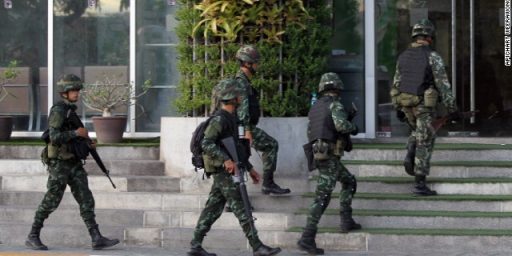