NO WORD ON THE INFIELD FLY RULE

A divided Supreme Court today ruled 5-4 that three-strikes laws are Constitutional, even if one or more of the crimes is minor. This overturned an Appeals court ruling that such laws violate the cruel and unusual punishment provisions of the 8th Amendment. In another 8th Amendment case, the Court ruled 6-3 that it is permissible for states to post on the Internet the names of convicted sex offenders who have served their time, claiming that such a law was nonpunitive and its retroactive application does not violate the Constitution.

I’ll have to read the text of these decisions at some point to see the nuances of the cases. On the surface, however, both rulings strike me a bad. Three strikes laws allow–indeed, require–the state to impose life sentences without possibility of parole on someone convicted of three felonies. While that sounds reasonable on the surface, a lot of jurisdictions make very minor offenses felonious. Plus, there are no time restrictions on most of these laws. So, someone could commit a couple of minor crimes in their teens and another one later in life and be treated more harshly than a first-time murderer. I’m less troubled by the sex offender ruling given the virtual certainty that those released will be recidivist. However, imposing the “non-punishment” retroactively strikes me as a clear ex post facto law, regardless of how one rationalizes it. 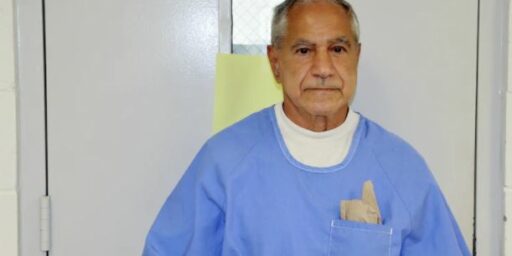