North Korea To Be Ruled By Commitee? 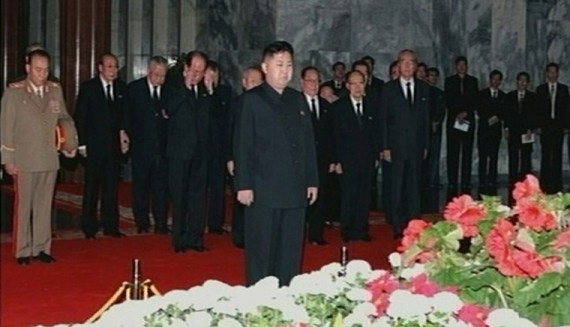 If a report from Reuters is to be believed, Kim Jong Un will not have the same power over the DPRK that his father and grandfather did, at least not for the time being:

(Reuters) – North Korea will shift to collective rule from a strongman dictatorship after last week’s death of Kim Jong-il, although his untested young son will be at the head of the ruling coterie, a source with close ties to Pyongyang and Beijing said.

The source added that the military, which is trying to develop a nuclear arsenal, has pledged allegiance to the untested Kim Jong-un, who takes over the family dynasty that has ruled North Korea since it was founded after World War Two.

The source declined to be identified but has correctly predicted events in the past, telling Reuters about the North’s first nuclear test in 2006 before it took place.

The comments are the first signal that North Korea is following a course that many analysts have anticipated — it will be governed by a group of people for the first time since it was founded in 1948.

Both Kim Jong-il and his father Kim Il-sung were all-powerful, authoritarian rulers of the isolated state.

The situation in North Korea appeared stable after the military gave its backing to Kim Jong-un, the source said.

“It’s very unlikely,” the source said when asked about the possibility of a military coup. “The military has pledged allegiance to Kim Jong-un.”

North Korea’s collective leadership will include Kim Jong-un, his uncle and the military, the source said.

Jang Song-thaek, 65, brother-in-law of Kim Jong-il and the younger Kim’s uncle, is seen as the power behind the throne along with his wife Kim Kyong-hui, Kim Jong-il’s sister. So too is Ri Yong-ho, the rising star of the North’s military and currently its most senior general.

The younger Kim, who is in his late 20s, has his own supporters but is not strong enough to consolidate power, analysts said.

Assuming this is to be believed then two thing would seem to be true. First, Kim the Youngest is not powerful enough to assume control by himself, especially in the face of  Workers Party and military leaders who are much older and more experienced than he is. At the same time, neither the military nor other elements of the Party can afford to take power on their own, largely because they have invested the past 63 years creating a cult-like following around the Kim family. Cutting the self-appointed heir of the Dear Leader off at the knees so soon after his fathers death simply wouldn’t be possible. Give it time, though, and it wouldn’t be surprising to see a power struggle. It’s all positively medieval, as if we’re witnessing a replay of struggles between families with names like York Stuart, Tudor, and Plantangenet. Of course, this time there’s a million man army, enough artillery power to turn Seoul into a burning apocalypse, and, oh yeah, nuclear weapons.