North Korea is now apparently telling diplomats in Pyongyang that they should consider leaving before next Wednesday:

WASHINGTON — North Korea is continuing to escalate its war rhetoric, warning foreign diplomats in Pyongyang on Friday they might not be safe after April 10 in the event of a conflict.

According to Agence France-Presse, British diplomats were warned that their safety can’t be guaranteed after April 10.

The Russian foreign ministry Twitter feed tweeted that their diplomats had been told to leave.

Similar warnings were apparently also issued to British and German diplomats, although the British appear to have responded by saying that they consider it to be nothing more than another example of the DPRK’s bluster toward the West. What this actually means is hard to say, but it likely means that the North Koreans are going to keep beating the drums of war for the foreseeable future. Indeed, with the new South Korean President scheduled to visit the United States in May, one can see them keeping tensions high for the next several weeks. 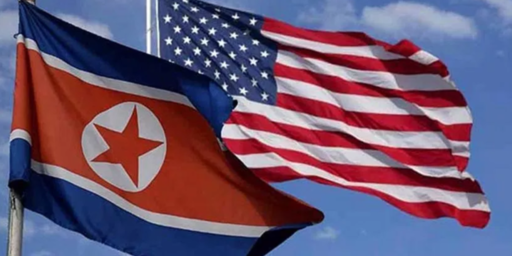