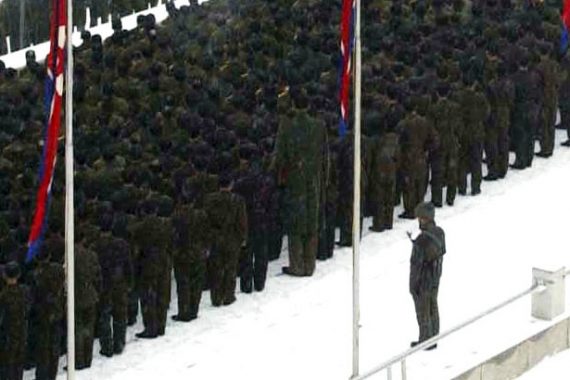 A few people over at Reddit have discovered an odd detail from photographs of yesterday’s memorial service for Kim Jong-il:

At the Wire today, Dashiell Bennett highlights the North Korean state news agency’s apparently random manipulation of an image from yesterday’s funeral procession for Kim Jong Il — a crude photoshop job done, Bennett notes, “in such a minor and pointless way that it underscores the paranoid insanity of totalitarian regimes.” Meanwhile, over on Reddit, a user links to an Imagur upload of another photo containing a remarkable detail: what appears to be a member of the military in the back row of an orderly formation of mourners, as Kim’s funeral procession passes near the Kumsusan Memorial Palace in Pyongyang, standing at least nine feet tall.

The original photo is at the link, the photo above is an enhancement of the center-right portion of the rank of soldiers that appears to show a giant towering over everyone else. The original photo comes from a western news agency and was ever in the custody of North Korea’s press agency.

So what are we looking at here? A genetic oddity? A new breed of supersolder? Most likely, as J.J. Gould’s readers have opined, it’s this guy.