Northwest Airlines handled the first day of the strike by its mechanics virtually without incident, owing to a surfeit of unemployed mechanics and lack of support from other unions.

Northwest Airlines Corp. encountered picket lines and some flight delays as it weathered the first day of a strike by its 4,400 mechanics and maintenance workers.

The first major airline strike in seven years has set the stage for a confrontation that could reshape labor relations in a struggling industry. The airline unions, once a dominant force, have lost much of their power as their members have had to sacrifice wages and jobs repeatedly to keep the carriers afloat. With the industry in dire condition, the balance of power appears to be shifting away from organized labor to airline executives.

Northwest was able to maintain operations largely because its other labor groups, representing pilots, flight attendants and baggage handlers, ignored the strikers and reported to work. Airline officials claimed victory yesterday, saying 14 months of preparations for the walkout were paying off. They added that no further negotiations with the union were planned. “We’re predominately running on schedule,” said Andrew C. Roberts, Northwest’s vice president of operations. “We don’t expect any delays to increase, and our operations should improve over time.”

But smooth operations in the morning turned bumpy. A flight from Detroit to Boston scheduled to depart at 10:30 a.m. left at 4:39 p.m. because of mechanical problems. Another Detroit-to-Boston flight was delayed nearly an hour because of a problem loading luggage. A New York-to-Tokyo flight with a departure at 2:35 p.m. was rescheduled to leave at 5:30 p.m. because of an “aircraft change due to maintenance,” according to the airline. And four tires blew out on a jet landing in Detroit in what the airline described as a braking issue unrelated to the strike. No one was injured.

The disruptions were not on the scale of previous walkouts. In the past, sympathetic unions commonly sided with their fellow employees and launched slowdowns or strikes of their own. Now, many union workers prefer to preserve their jobs at lower wages than risk losing them through labor strife. In earlier days, airlines also risked an exodus of travelers reluctant to cross picket lines and concerned about disruptions to flight schedules, boosting the workers’ negotiating power. But those forces were not materializing yesterday.

Northwest prepared for the walkout by lining up 1,300 replacement mechanics, mostly workers laid off from other airlines who were willing to work for lower wages. It also arranged for lower-paid contract workers to perform other jobs such as aircraft cleaning.

Air travel is increasingly fraught with aggravations and delays, strike or no, so my guess is the few delays reported are unrelated to the strike.

The Northwest strikers seem to be in an even less advantageous bargaining position than the NHL hockey players. When one’s industry is losing money in massive quantities, threatening to withhold one’s services has substantially less impact than it would were it profitable. The fact that 1300 mechanics who had already been laid off jumped at the chance to work for the wages Northwest’s balked would seem like a good clue. 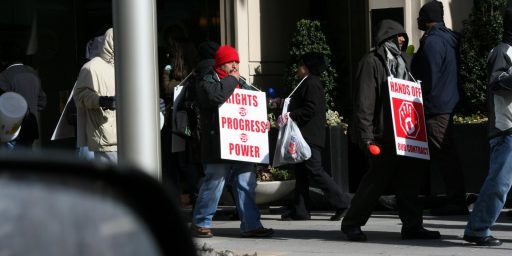