Not Divided After All?

NYT — A Nation Divided? Who Says? 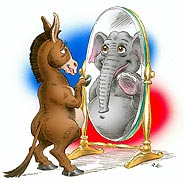 If you’ve been following the election coverage, you know how angry you’re supposed to be. This has been called the Armageddon election in the 50-50 nation, a civil war between the Blue and the Red states, a clash between churchgoers and secularists hopelessly separated by a values chasm and a culture gap.

But do Americans really despise the beliefs of half of their fellow citizens? Have Americans really changed so much since the day when a candidate with Ronald Reagan’s soothing message could carry 49 of 50 states?

To some scholars, the answer is no. They say that our basic differences have actually been shrinking over the past two decades, and that the polarized nation is largely a myth created by people inside the Beltway talking to each another or, more precisely, shouting at each other.

These academics say it’s not the voters but the political elite of both parties who have become more narrow-minded and polarized. As Norma Desmond might put it: We’re still big. It’s the parties that got smaller.

Most voters are still centrists willing to consider a candidate from either party, but they rarely get the chance: It’s become difficult for a centrist to be nominated for president or to Congress or the state legislature, said Morris P. Fiorina, a political scientist at Stanford and senior fellow at the Hoover Institution.

“If the two presidential candidates this year were John McCain and Joe Lieberman, you’d see a lot more crossover and less polarization,” said Professor Fiorina, mentioning the moderate Republican and Democratic senators. He is the co-author, along with Samuel J. Abrams of Harvard and Jeremy C. Pope of Stanford, of the forthcoming book, “Culture War? The Myth of a Polarized America.”

“The bulk of the American citizenry is somewhat in the position of the unfortunate citizens of some third-world countries who try to stay out of the cross-fire while Maoist guerrillas and right-wing death squads shoot at each other,” the book concludes. “Reports of a culture war are mostly wishful thinking and useful fund-raising strategies on the part of culture-war guerrillas, abetted by a media driven by the need to make the dull and everyday appear exciting and unprecedented.”

Further evidence of a truce comes from Paul DiMaggio, a sociologist at Princeton, and colleagues who have studied attitudes toward a wide range of issues like race, crime, the role of women and the welfare state. They looked at various demographic divisions – by race, age, sex, education, religious denomination, region – and found that gaps among groups have been constant or shrinking for the past three decades.

“The two big surprises in our research,” Professor DiMaggio said, “were the increasing agreement between churchgoing evangelicals and mainline Protestants, even on abortion, and the lack of increasing polarization between African-Americans and whites. Evangelicals have become less doctrinaire and more liberal on issues like gender roles. African-Americans are showing more diversity in straying from the liberal line on issues like government programs that assist minorities.”

Alan Wolfe, a political scientist at Boston College, reached similar conclusions in his 1998 book, “One Nation, After All,” which called the culture war largely a product of intellectuals.

“Compared to earlier periods – the Civil War, the 1930’s, the 1960’s – our disagreements now are not that deep,” Professor Wolfe said last week. “Indeed, it is only because we agree so much on so many things that we can allow ourselves the luxury of thinking we are having a culture war. When one of society’s deepest divisions is over stem cells, that society is pretty unified.”

It’s certainly true that we’re reaching consensus on previously divisive issues. Then again, that’s always been the case. There’s not a lot of debate over whether we should re-institute slavery or deny women the franchise these days. So, if one looks at issues that divided us a generation ago, it’s not surprising that progress has been made in reaching accomodation. But new issues emerge continuously and it is over them that the debate occurs.

The fact that only a handful of states are considered “in play” in presidential elections anymore is a pretty good indicator that we’re divided. That doesn’t mean that we’re in danger of a civil war or even that things are acrimonious compared to previous eras, such as the late 1960s. Still, the debate is much less civil than it has been in all but a few eras of our history and the nature of the discourse, because of the ability to narrowly target one’s audience on niche programming, is much coarser than it has been in living memory.