In the years following the invasion of Iraq I frequently read claims that there had been a long “drumbeat to war” in advance of the invasion. When I asked those making such claims to substantiate them, I was invariably disappointed. I can only interpret this op-ed from Alan J. Kuperman, director of the Nuclear Proliferation Prevention Program at the University of Texas at Austin, as a drumbeat to war:

Since peaceful carrots and sticks cannot work, and an invasion would be foolhardy, the United States faces a stark choice: military air strikes against Iran’s nuclear facilities or acquiescence to Iran’s acquisition of nuclear weapons.

The risks of acquiescence are obvious. Iran supplies Islamist terrorist groups in violation of international embargoes. Even President Ahmadinejad’s domestic opponents support this weapons traffic. If Iran acquired a nuclear arsenal, the risks would simply be too great that it could become a neighborhood bully or provide terrorists with the ultimate weapon, an atomic bomb.

As for knocking out its nuclear plants, admittedly, aerial bombing might not work. Some Iranian facilities are buried too deeply to destroy from the air. There may also be sites that American intelligence is unaware of. And military action could backfire in various ways, including by undermining Iran’s political opposition, accelerating the bomb program or provoking retaliation against American forces and allies in the region.

But history suggests that military strikes could work. Israel’s 1981 attack on the nearly finished Osirak reactor prevented Iraq’s rapid acquisition of a plutonium-based nuclear weapon and compelled it to pursue a more gradual, uranium-based bomb program. A decade later, the Persian Gulf war uncovered and enabled the destruction of that uranium initiative, which finally deterred Saddam Hussein from further pursuit of nuclear weapons (a fact that eluded American intelligence until after the 2003 invasion). Analogously, Iran’s atomic sites might need to be bombed more than once to persuade Tehran to abandon its pursuit of nuclear weapons.

As for the risk of military strikes undermining Iran’s opposition, history suggests that the effect would be temporary. For example, NATO’s 1999 air campaign against Yugoslavia briefly bolstered support for President Slobodan Milosevic, but a democratic opposition ousted him the next year.

We have reached the point where air strikes are the only plausible option with any prospect of preventing Iran’s acquisition of nuclear weapons. Postponing military action merely provides Iran a window to expand, disperse and harden its nuclear facilities against attack. The sooner the United States takes action, the better.

That’s completely unambiguous. He’s urging us to go to war with Iran.

I think that Dr. Kuperman is too quick to dismiss Iran’s likely responses to such an attack and too optimistic about its prospects for success. We should keep in mind that attacking Iran would be yet another “war of choice” for us but the present Iranian regime would be fighting for its survival. We should expect it to respond commensurately.

Contrary to the title of Dr. Kuperman’s op-ed, I no longer believe there is any way to “stop Iran” and we should be devoting our energies to evaluating how to contain it and moving to do so. Unfortunately, I don’t believe we have the stomach either to stop or to contain Iran. 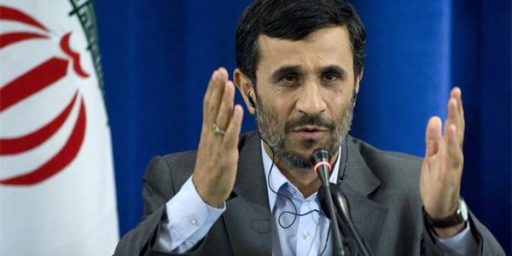