President Obama is rewarding unqualified hacks who raised huge sums for his campaign with ambassadorships.

President Obama is rewarding unqualified hacks who raised huge sums for his campaign with ambassadorships.

Henri J. Barkey, head of international relations at Lehigh and a State Department staffer at the tail end of the Clinton administration, took to the Washington Post last week to proclaim, “Obama’s ambassador nominees are a disservice to diplomacy.”

Two Norwegian lawmakers have nominated Edward Snowden, the bête noire of U.S. intelligence, for the Nobel Peace Prize. It is quite possible that this is the Norwegians’ way of showing their displeasure and shame at having the Obama administration nominate a completely unqualified person to be its ambassador to Oslo.

The nominee, a Long Island campaign bundler named George Tsunis, made a fool of himself during his Senate confirmation hearings last month. He was unaware of some of the most basic facts about Norway. He admitted never having set foot in the country, and he seemed to think that Norway, a monarchy, has a president. He also had no idea which political parties constituted Norway’s governing coalition, even though, as ambassador, he would be dealing with them. It seemed, as some later tweeted, that Tsunis had not even bothered to read the Wikipedia page for Norway.

President Obama does a disservice to Norwegians, to himself and, above all, to the people of the United States by sending such an unqualified person to represent him and us in the capital of a long-standing NATO ally. (I wonder if Tsunis knows that Norway is a member of NATO and not the European Union.) Instead of goodwill, he is engendering anti-American sentiment. Norwegians are likely to conclude that all they are worth to Obama is about $1.3 million — the sum Tsunis bundled or contributed to Obama’s reelection campaign and other Democratic efforts in 2012.

The nominee to be U.S. ambassador to, say, Hungary should be able to explain what the U.S. strategic interests are in that country — right?

But Colleen Bell, a soap opera producer and President Obama’s appointee to be U.S. envoy to that European country, struggled to answer that simple question during her recent confirmation hearing.

“Well, we have our strategic interests, in terms of what are our key priorities in Hungary, I think our key priorities are to improve upon, as I mentioned, the security relationship and also the law enforcement and to promote business opportunities, increase trade …” she responded, grasping for words, to a question by Sen. John McCain (R-AZ) on Jan. 16. (You can see the full hearing here.)

As McCain tweeted later about the confirmation hearings that day: “You can’t make this up.”

President Obama used to say that he wanted to rely more on career diplomats to serve as U.S. ambassadors. But the State Department’s professional association, the American Foreign Service Association or AFSA, says that he has named a higher percentage of political appointees than his predecessors. He’s given plum assignments to political donors such as Bell, who have made headlines recently with embarrassing gaffes at their confirmation hearings.

The WaPo editorial board (“Ambassadorships are President Obama’s political plums“) weighs in against the practice with yet another embarrassing example:

NOAH BRYSON Mamet is a political consultant who raised at least $500,000 for President Obama and the Democratic Party in the 2012 election cycle. As of last week, he had never visited Argentina — which helps explain the ambassador-designate’s spotty performance before the Senate Foreign Relations Committee at his confirmation hearing. Mr. Mamet repeatedly described Argentina as a U.S. ally, said it was “a mature democracy” and praised its record on human rights.

That provoked a bipartisan tongue-lashing from Sens. Robert Mendendez (D-N.J.), the committee chairman, and Marco Rubio (R-Fla.), who pointed out that the Argentine government under Cristina Fernández de Kirchner has compromised freedom of the press and the judiciary, refused to pay debts to the U.S. government and American bondholders, seized equipment from a U.S. military training mission, undermined an investigation of an Iranian-sponsored terrorist bombing and aligned itself with the rabidly anti-American governments of Cuba and Venezuela. “This is the most unique ally I think we have in the world,” Mr. Rubio dryly noted.

Rubio apparently hasn’t followed Afghanistan, Pakistan, or much of the Middle East. But I take his point.

Slate and the Center for Public Integrity put together this excellent interactive map showing them all (in green), as well as a selection of other political appointees (in red) and actual career diplomats (in blue). Here is a static grab of the map : 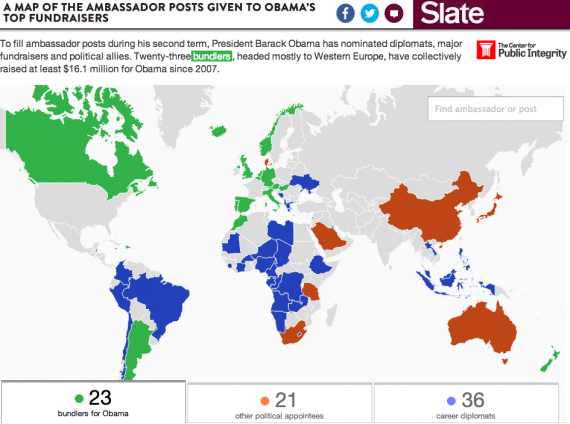 The United States claims to value the efforts of diplomats — a point the president reiterated in his State of the Union speech last week. So why do so many seem to think that diplomacy is a profession that anyone can engage in? If you had a plumbing problem, would you call your friendly ambassador to fix it? What message is the president sending to Foreign Service officers and to former and current ambassadors of distinction?

The Obama administration’s appointments suggest that the president isn’t being honest when he says that diplomacy is important to him. Yet the administration clearly values diplomacy — officials, including the president, have emphasized that the ongoing negotiations with Iran are the way to resolve the nuclear impasse. Would Obama consider making Tsunis our negotiator? Of course not. Yet it’s illogical, and insulting, to presume that Norwegians are such wonderful and civilized people — and hence unlikely to cause any problems with Washington — that we can afford to send someone on a taxpayer-funded three-year junket to enjoy the fjords.

The Post has been on this story for some time. They published an op-ed by Susan R. Johnson, Ronald E. Neumann and Thomas R. Pickering last April titled “Presidents are breaking the U.S. Foreign Service.”

American diplomacy is facing a crisis. The professional career service that is intended to be the backbone of that diplomacy no longer claims a lead role at the State Department or in the formulation or implementation of foreign policy. The U.S. Foreign Service is being marginalized — just as military efforts to resolve major diplomatic challenges in Iraq and Afghanistan have failed, and as diplomacy has become both more complex and more important to our national security and prosperity.

The Foreign Service is being relegated to a secondary status: staff support to political elites who set and manage policy. Long-held concepts about the disciplined, competitive, promotion-based personnel system are being called into question.

The Rogers Act established the Foreign Service as a merit-based, professional diplomatic service in 1924. This concept was reemphasized in 1946, after the U.S. experience in World War II ratified the need to model the Foreign Service’s personnel system after that of the military rather than the domestic civil service. The 1980 Foreign Service Act reiterated that “a professional career Foreign Service based on merit principles was necessary to meet the challenges of a more complex and competitive world.” The importance of a professional diplomatic service has been underscored by our national experience in the simultaneous wars in Iraq and Afghanistan and the broad array of current and foreseeable challenges.

What is wrong at State, the U.S. Agency for International Development, our embassies and other agencies that together are the vehicles for American diplomacy? What accounts for the Foreign Service being marginalized?

The most visible factor is the overwhelming — and growing — presence of political appointees in mid-level and top leadership positions at the State Department. For all their merit, political appointees are short-term officials, subject to partisan, ­personality-specific pressures. They do not notably contribute to the institution’s longer-term vitality, and their ascension creates a system inherently incapable of providing expert, nonpartisan foreign policy advice.

When the bulk of its leadership positions are held by transient appointees, the Foreign Service is undermined. This situation spawns opportunism and political correctness, weakens esprit de corps within the service and emaciates institutional memory.

‘Now, I think this goes too far. As Neumann notes in the NPR story linked above, his own father was “an enormously competent appointee who served four presidents, three embassies and two parties” as ambassador to Afghanistan, Morocco and Saudi Arabia. But, like Barkey, the elder Neumann was an international relations scholar with deep expertise and experience in the region, not a political hack. Further, as our own John Burgess, a retired career foreign service officer, has noted, an appointee can be an enormous asset if he has the ear of the president.

But filling this many ambassadorships with people whose sole qualification is having raised a lot of money for the president not only smacks of corruption but undermines our foreign relations. As the WaPo editorial puts it,

All presidents appoint some ambassadors who are not professional diplomats. Most have been harmless; a few have been stellar. Mr. Obama, however, has considerably stretched the boundaries of previous presidential records, both in quantity and in apparent disregard for quality. The president promised in 2009 to increase professional appointments, and the State Department said last Friday that it aims for a 70-30 split between career and political ambassadors. Yet, so far in his second term, 53 percent of Mr. Obama’s appointments have been political, according to the American Foreign Service Association. A third have been fundraisers for his campaigns.

The bundlers are going not just to London, Brussels and Vienna, where their roles may be largely decorative, but also to countries where relations with the United States are troubled.

Ambassadorial appointments for small allies such as Norway or tough partners including Hungary and Argentina matter because their governments rarely receive the attention of high-level officials in Washington and yet require skilled diplomacy. It’s no wonder that Argentina, the third-largest economy in Latin America but a perennial trouble spot, was tended by career diplomats under the four presidents who preceded Mr. Obama. His use of the Buenos Aires embassy and so many others as political plums signals a disregard for U.S. foreign interests.

Even Jon Stewart is taking note:

This has now literally become a joke.