A new Gallup poll shows President Obama beating Hillary Clinton in a hypothetical 2012 Democratic nomination fight. Nobody should be surprised by that. 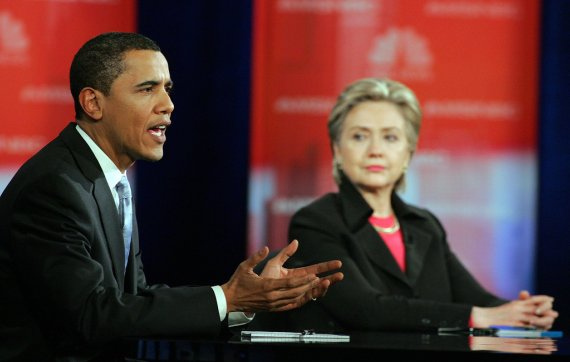 One of the recurring fantasies on the right over the past year or so has been the idea that Hillary Clinton would challenge Barack Obama for the Democratic nomination again in 2012. As ridiculous as the scenario of a (former) Secretary of State challenging the head of an Adminstration she had once been a part of might sound, it’s a meme that has persisted despite Clinton’s own denial that she’s interested in running for President again, and despite polls showing that President Obama remains hugely popular among Democrats.

Well, now there’s a Gallup poll that should answer the question once and for all:

PRINCETON, NJ — If Secretary of State Hillary Clinton were to challenge President Barack Obama for the Democratic presidential nomination in 2012, she would currently have the support of 37% of Democrats nationally, while 52% would support Obama.

NBC’s “Meet the Press” host David Gregory on Sept. 5 raised the possibility that Clinton might renew her battle against Obama for the Democratic Party’s presidential nomination, asking outside White House adviser David Plouffe, “Do you envision a primary challenge from another Democrat in 2012 against this president?” Gregory then asked more specifically, “Do you — can you rule out, based on actual information, that Secretary of State Clinton would not pursue the presidency again, would not challenge President Obama?”

Clinton was Obama’s main challenger for the 2008 Democratic nomination in a long-fought and, at times, contentious battle. Once Obama clinched the nomination, Clinton and her husband Bill Clinton strongly supported Obama’s nomination, and Hillary Clinton now serves in Obama’s cabinet as secretary of state.

President Obama has yet to announce his intentions for 2012, although Harry Truman in 1952 and Lyndon Johnson in 1968 have been the only presidents since Calvin Coolidge to decline to seek re-election when they were eligible to do so.

So, there you have it. Two years after nearly fighting the Barack Obama to a draw for the Democratic nomination, Hillary Clinton only garners 37% of the members of her own party. That, along with all the other reasons out there, should be reason enough to put these absurd “Hillary 2012” fantasies to rest.

As things stand right now, President Obama’s job approval rating among Democrats exceeds 80%. Unless and until that number changes, the idea that he will face a serious primary challenge (as opposed to an un-serious one, which is certainly possible) is little more than a fantasy perpetuated by people who, until Barack Obama came along, considered Hillary Clinton to be their greatest political enemy.