Obama Considering Plan That Would Get U.S. Ground Troops Closer To Front Lines In ISIS War

President Obama is reportedly considering a plan that would put American forces much closer to the ground war in the war against ISIS. 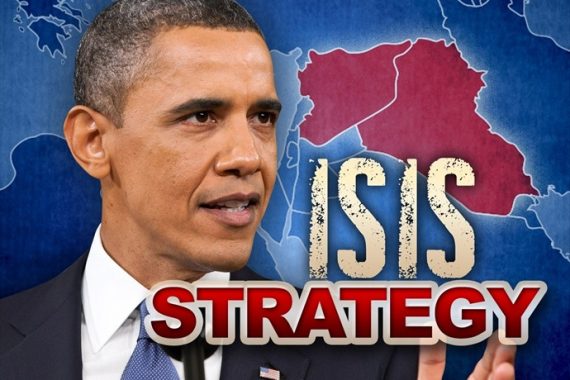 The Washington Post is reporting that President Obama and the Pentagon are weighing a change in policy regarding the use of American ground troops in the fight against ISIS that seems as though it will inevitably result in American ground forces of some kind getting directly involved in the fight:

President Obama’s most senior national security advisers have recommended measures that would move U.S. troops closer to the front lines in Iraq and Syria, officials said, a sign of mounting White House dissatisfaction with progress against the Islamic State and a renewed Pentagon push to expand military involvement in long-running conflicts overseas.

The debate over the proposed steps, which would for the first time position a limited number of Special Operations forces on the ground in Syria and put U.S. advisers closer to the firefights in Iraq, comes as Defense Secretary Ashton B. Carter presses the military to deliver new options for greater military involvement in Iraq, Syria and Afghanistan.

The changes would represent a significant escalation of the American role in Iraq and Syria. They still require formal approval from Obama, who could make a decision as soon as this week and could decide not to alter the current course, said U.S. officials who spoke on the condition of anonymity because the discussions are still ongoing. It’s unclear how many additional troops would be required to implement the changes being considered by the president, but the number for now is likely to be relatively small, these officials said.

The recommendations came at Obama’s request and reflect the president’s and his top advisers’ concern that the battle in Iraq and Syria is largely stalemated and in need of new ideas to generate momentum against Islamic State forces.

The list of options that went to the president was generated by field commanders and vetted by the president’s top national security advisers, including Carter and Secretary of State John F. Kerry, in a series of meetings over the past few weeks.

More costly and ambitious measures, such as no-fly zones or buffer zones that would require tens of thousands of ground troops to effectively protect innocent civilians, did not receive the backing of any of Obama’s top policy advisers. Democratic presidential front-runner Hillary Rodham Clinton has said that she favors a no-fly zone in Syria.

Senior U.S. officials, however, warned that such measures had the potential to put the United States in direct conflict with the Syrian regime and the Russian and Iranian forces backing it.

The recommendations delivered to Obama would not put U.S. forces in a direct combat role. But they reflect a major shift in mission for the Pentagon, where as recently as last year officials were focused on winding down U.S. wars and on emerging threats such as China’s military rise.

The recommendations that went to Obama in a memo last week reflect the president’s conflicting impulses. The proposal would put a small number of U.S. advisers on the ground in Syria for the first time since the United States began military operations against the Islamic State last year. The Pentagon has sent small Special Operations teams into Syria for lightning-quick missions several times since the war began in 2011. The newly proposed Special Operations forces would work with moderate Syrian Arab rebels and possibly some Kurdish groups, such as the People’s Protection Units, or YPG, that have scored some recent victories against the Islamic State.

These groups, backed by American air power, are expected to mount a military offensive on Raqqa, the Islamic State’s de facto capital in Syria, in the near future. The push against Raqqa, if it proves effective, would mark a significant setback for the Islamic State, U.S. officials said.

As for the Iraq side of the border, the president’s top advisers have recommended embedding U.S. advisers at the brigade level for specific operations such as the attack to retake Ramadi, a key western Iraqi city that Islamic State forces seized this past spring. Such a move would position U.S. troops, now largely assigned to training bases, closer to the front lines, where they could help Iraqi commanders plan and prosecute the day-to-day fight against the Islamic State in Ramadi.

In both Iraq and Syria, senior officials have also discussed more aggressively targeting Islamic State infrastructure to cripple the group financially. The Islamic State depends on the sale of oil and electricity inside Syria to pay for its military operations. A more aggressive air campaign, however, carries risks of increasing civilian casualties or making an already horrible humanitarian situation worse.

This news comes in the wake of more than a month’s worth of news that seemed to detail nothing but setbacks in the fight against ISIS and overall U.S. strategy in Iraq and Syria. The most notable development over the past month or so, of course, has been the introduction into the Syrian side of the conflict of Russian air power which the Russians claim has been used to hit ISIS and Islamist rebel targets but which the U.S. and others claim has been largely targeted at the so-called “moderate” Syrian rebels that have been at the center of American policy in Syria for several years now. That strategy largely been a failure, not the least because many of these so-called “moderates” have been caught selling the arms they received from the West to ISIS and other radical elements, The principal part of U.S. policy on the ground has been a program to train and arm the “moderate” Syrian rebels, but over the summer, we learned that no more than sixty, and perhaps as few as five, actual fighters have been successfully trained by the American-sponsored program. Given that, it didn’t come entirely as a surprise when, earlier this month, the Obama Administration quietly announced that the portion of that program run by the Pentagon was being abandoned in favor of a new strategy that still isn’t entirely clear yet. Beyond Syria, though, there are some indications that Russia is preparing to expand its role in the region, including reports that the Iraqis are considering granting Russia permission to conduct raids inside its borders, a possibility which has reportedly been met with strong rebukes from the United States.  To say that the situation on the ground in Iraq and Syria is chaotic, then, is something of an understatement.

While the details of what is being recommended to the President have yet to be made public, it seems clear that it would involve changes that will put American forces even closer to combat with ISIS fighters than they have been before. Already, we have seen the first American ground combat death in the ISIS war when, last week, an American solider was killed in a raid by American and Kurdish commandos on a suspected ISIS prison. If the President adopts the proposals that are being put forward now, it seems inevitable that this will simply be the first of many casualties to come, and that perhaps we will be risking American troops being taken prisoner by ISIS forces, or by other rebel groups who may be willing to sell American prisoners to ISIS for arms and other supplies. More importantly, it seems fairly clear that the policy the Administration is considering here poses a high risk of putting either President Obama or his successor on a course toward self-sustaining escalation. Indeed, escalation can be said to be the definition of our entire policy against ISIS over the past year or more. What started out as a limited air mission to aid Yazidi refugees caught in the middle of a fight between ISIS and the Iraqi Army quickly expanded to include direct aid to the Kurds and the Iraqi Army, efforts to put together some kind of “moderate” force of rebels that could both fight ISIS and fight Bashar Assad at the same time notwithstanding the fact that these are mutually contradictory goals, airstrikes against ISIS positions, and now to a proposal to put American forces closer to combat in Iraq than they have been since the end of the Iraq War. It is, of course, a strategy that lacks any real coherence that only seems to be guaranteed to get the United States more deeply involved in the ground war as time goes on.