Would you like President Obama to speak at your graduation? You're the only one. 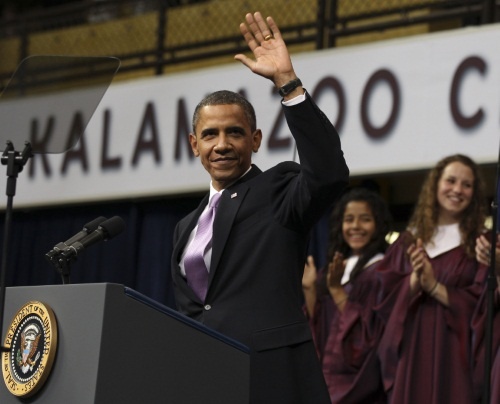 Would you like President Obama to speak at your graduation? You’re the only one.

Peter Maer for CBS News (“White House memo notes shortage of applicants for contest to have Obama to speak at high school graduation“):

The White House is ramping up an effort to promote a nationwide competition to decide which high school wins a commencement speech by President Obama.

An internal White House memo indicates that the White House is facing a shortage of applications less than a week before the deadline.

The competition was extended from the February 25 deadline until Friday, March 11 after few schools met the original application deadline. CBS News has learned a White House Communications Office internal memo dated February 22 noted “a major issue with the Commencement Challenge.”

“As of yesterday we had received 14 applications and the deadline is Friday,” the memo said. The memo also urged recipients to, “please keep the application number close hold.”

A follow-up memo on February 28 reported receipt of 68 applications. Noting the competition among more than 1,000 schools last year, the memo said, “Something isn’t working.” It called on staffers to ask “friendly congressional, gubernatorial and mayoral offices” to encourage schools to apply.

“We should also make sure the Cabinet is pushing the competition out to their lists,” the memo said. The note reiterated, “We do not want the actual application number out there (we didn’t release the number of applications we received last year until after the submission period)-so folks should not use it in their pitches.”

On Monday, officials declined to cite the number of applications received so far.

The president will travel to the school that is judged to best prepare students for college and careers. The competition is part of Mr. Obama’s ultimate goal of making the U.S. the country with the highest proportion of college graduates by 2020.

This is rather amusing, although presumably some sort of snafu in getting the word out rather than lack of actual interest in having the president come and speak. Obama remains reasonably popular–remarkably so, in fact, given the sorry state of the economy–and even unpopular presidents have pockets of strong support.