There's a large group of people out there that like the President, but they're probably not going to vote. 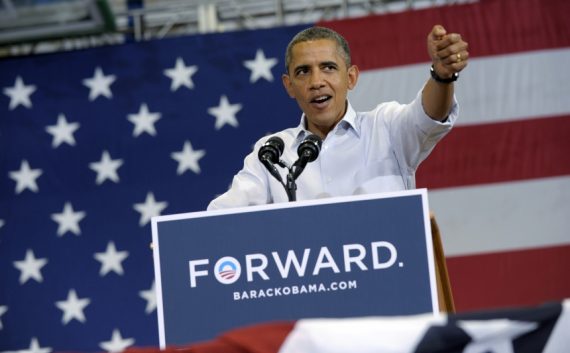 A new poll indicates that President Obama holds a strong lead among people who, in all likelihood, will not be voting in November, although one of the reasons they won’t be voting appears to be frustration with him:

They could turn a too-close-to-call race into a landslide for President Obama— but by definition they probably won’t.

Call them the unlikely voters.

A nationwide USA TODAY/Suffolk University Poll of people who are eligible to vote but aren’t likely to do so finds that these stay-at-home Americans back Obama’s re-election over Republican Mitt Romney by more than 2-1. Two-thirds of them say they are registered to vote. Eight in 10 say the government plays an important role in their lives.

Even so, they cite a range of reasons for declaring they won’t vote or saying the odds are no better than 50-50 that they will: They’re too busy. They aren’t excited about either candidate. Their vote doesn’t really matter. And nothing ever gets done, anyway.

Many of these unlikely voters are suspicious of and disconnected from politics. In the survey, six in 10 say they don’t pay attention to politics because “nothing ever gets done”; 54% call politics “corrupt.” Only 39% could correctly name the vice president, Joe Biden. (By contrast, a Pew Research Center poll in 2010 found 59% of American adults could name the vice president.)

On the other hand, they do see a difference between the two major parties: 53% disagree with the statement that “there’s not a dime’s worth of difference between Democrats and Republicans.” Obama scores a huge advantage among all the unlikely voters. By 43%-18%, they support the Democratic incumbent over his Republican challenger.

“There’s this pool of people that Barack Obama doesn’t even need to persuade,” says David Paleologos, director of the Suffolk University Political Research Center, which took the survey. “All he needs to do is find them and identify them and get them to the polls. It’s like a treasure chest. But the bad news is that the treasure chest is locked. …

The attitudes of the non-voters are ones  that many Americans share, of course, and it’s one of the reasons that we see things like a 10% job approval rating for Congress and a general sense that the country is on the wrong track, an attitude that has been prevalent since the 2008 financial crisis. Those are attitude that all Americans hold, though, it takes just a little bit more to push people into the “the hell with all of it” crowd sufficiently that they stay home on Election Day:

Even in 2008, when turnout was the highest in any presidential election since 1960, almost 80 million eligible citizens didn’t vote. Curtis Gans, director of the non-partisan Center for the Study of the American Electorate, predicts that number will rise significantly this year. He says turnout could ebb to levels similar to 2000, when only 54.2% of those eligible to vote cast a ballot. That was up a bit from 1996, which had the lowest turnout since 1924.

This year, perhaps 90 million Americans who could vote won’t. “The long-term trend tends to be awful,” Gans says. “There’s a lot of lack of trust in our leaders, a lack of positive feelings about political institutions, a lack of quality education for large segments of the public, a lack of civic education, the fragmenting effects of waves of communications technology, the cynicism of the coverage of politics — I could go on with a long litany.”

There’s also the relentlessly negative tone of this year’s campaign. The majority of TV ads don’t try to persuade voters to support one candidate but rather to convince them not to back the other guy. Romney ads portray Obama as a failed president and a liar. Obama ads describe Romney as a heartless corporate raider whose firm has laid off American workers while he parked some of his fortune in a Swiss bank account. (Both candidates dispute the truthfulness of the other side’s commercials.)

“I really don’t know much about him, but from what I hear, he’s all about putting taxes on the middle-class people, and I’ve heard that he’s put his money in overseas accounts,” Jamie Palmer, 35, a mother of three from St. Joseph, Mo., says of Romney, echoing accusations made in Democratic ads. “I think that’s wrong.”

So will she vote? Not a chance.

Palmer has never voted. “If a candidate I liked ran for the presidency, that had the right things to say, I’d go vote,” she says. “But they say the same things; they make promises; they don’t keep them. It’s ridiculous. If I vote, nothing is going to come of it. It’s just going to be like it is right now.”

Many will dismiss the attitudes of people like Palmer and say that she’s failing to live up to her “civic duty” to vote, but I honestly can’t say that I blame her. If I were an Obama voter in 2008 who was drawn to his candidacy by rhetoric of hope and change, or at least the idea that he’d be able to fix what’s wrong with Washington, I’d be pretty fed up with him too. Four years later, very little has changed in Washington, the economy is limping along, and the President has continued his predecessors practice of accumulation more and more power in the Executive Branch in the name of “national security.” On the other side of the aisle, we have a Republican Party that, with only a few notable exceptions, is largely devoid of ideas and completely uninterested in governing rather than scoring political points by doing things like holding 33 meaningless votes in the House to repeal the Affordable Care Act. Some people choose to channel the frustration that the current political system into trying to change it, or supporting a third party, but others simply just give up, stop paying attention to the “news,” and essentially drop out of the political system. In all honesty, I can’t say that I blame them.

As I noted back in April, it’s fairly clear that we’re likely to see lower turnout in November than we did in 2008, most likely because a lot of the semi-engaged voters who were persuaded to vote for the President don’t really see a reason to show up at the polls this time. Additionally, as the campaign gets nastier and nastier there’s likely to be a not insignificant percentage of the public that is just going to switch the channel and spend the fall watching the NFL and the MLB Playoffs. It’s generally the case that the nastier a campaign becomes, the more voters becomes turned off and the more likely it is that voter turnout decreases.

The Obama campaign would no doubt like to get as many of these people to the polls as possible in November, and the campaign’s vast field operations are in part dedicated to identifying voters like this and trying to get them back into the mood of voting. Perhaps it will work to some extent, and in an election that is likely to be a close one it could make the difference in one swing state or another, but on the whole it’s just a fact of life that there is a large, if shifting, population of Americans who just don’t care to vote and there’s very little that any politician can do to change that. As far as I’m concerned, if they want to stay home on Election Day, that’s their choice.