President Obama's powers of persuasion were severely lacking at the G-20 Summit this weekend. 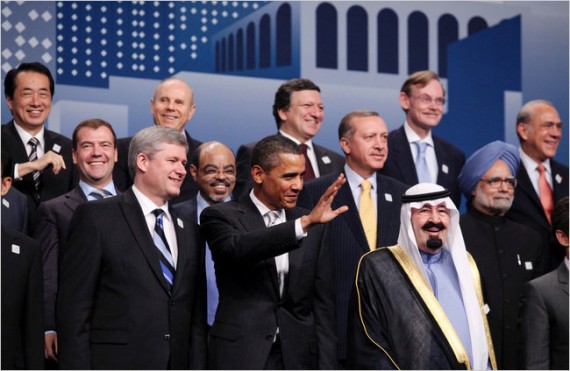 Perhaps the only bit of drama to come out of this weekend’s tightly scripted G-20 Summit in Toronto was the unwillingness of the world’s other major developed nations to go along with President Obama’s call for more economic stimulus:

TORONTO — President Obama warned Sunday that the world economic recovery remains “fragile” and urged continued spending to support growth, an expansionist call at the end of a summit marked by an agreement among developed nations to halve their annual deficits within three years.

The president’s remarks tempered the Group of 20’s headline achievement at the summit, a deficit-reduction target that had been pushed by Canadian Prime Minister Stephen Harper, the host of the meeting and a fiscal conservative. Although there is broad agreement that government debt in the developed world needs to be reduced, there is concern that cutting too fast and too deeply will slow growth and possibly spark a new recession.

In a news conference at the meeting’s conclusion, Obama said that the world’s largest economic powers had agreed on the need for “continued growth in the short term and fiscal sustainability in the medium term.”

“A number of our European partners are making difficult decisions,” Obama said. “But we must recognize that our fiscal health tomorrow will rest in no small measure on our ability to create jobs and growth today.”

The group’s closing statement included the specific deficit-reduction target, but it was couched in caveats — that deficit reduction needed to be “calibrated” to avoid harming growth, paced differently in each country and paired with other reforms to strengthen the economy.

Obama and European leaders, in particular, came to the meeting with sharply different views of the strength of the global economic recovery, with the U.S. president more pessimistic. The declaration, in the works for weeks, gave each side what it wanted, although the specific deadlines went further than the Obama administration had preferred before the meeting.

The administration accepted the deadlines in order to avoid standing against Harper and such important economic powers as Germany. In his closing remarks, Obama stressed that “every country will chart its own unique course, but make no mistake — we’re moving in the same direction.”

The International Monetary Fund’s managing director, Dominique Strauss-Kahn, called the deficit target an “oversimplification” of the problem; he said it was more important for individual countries to craft the right economic policies to sustain growth, not blindly cut for the sake of meeting a goal.

Along with pledging to cut their annual budget deficits by 2013, the developed countries committed to stabilizing their overall debt by 2016. Obama recently set similar goals for the United States.

Of course, whether any of these nations will actually meet these targets is another question entirely. However, the summit’s outcome does seem to suggest the beginnings of a fundamental difference of opinion between the United States and the rest of the developed world about the state of world economy and the proper focus of fiscal policy. On one side, there are the Europeans, led principally by the German Prime Minister Angela Merkel, who, having just been through a Spring filling with debt crises in Greece, Spain, and Portugal, are insisting that the focus must be on reducing Sovereign Debt. On the other, seemingly alone, stands President Obama who seems to be insisting that continued fiscal stimulus, regardless of considerations of where it will come from, is necessary to fend off a second global recession.

Leaving aside the question of which side is right, the fact that the President of the United States was so singularly unsuccessful in convincing the other world leaders to follow his lead is, if nothing else, an indication that U.S. economic leadership is not what it used to be.