Obama May Punt On Executive Action On Immigration, Even After The Election

Will the President back track on his promise of further action on immigration if the GOP wins the Senate? 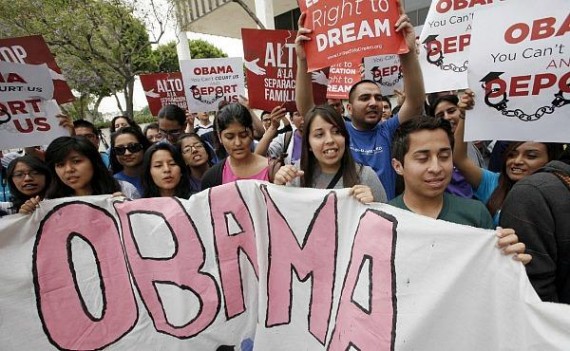 When the summer began, President Obama had said that he was directing his advisers to come up with a list of actions he could take on immigration that would not require the approval of Congress. This step had been rumored for some time, having been hinted about by Administration officials and was believed to include consideration of measures such as expanding the Deferred Action for Childhood Arrivals program that the President had announced two years earlier. As the summer wore on, though, reports circulated that many Democrats running for re-election in red states were urging the Administration to delay action until after the election for fear that anything announced before them would doom their campaigns. Last month, President Obama did in fact announce that there would be no action taken before the election, an action for which he received a lot of criticism from Latino organizations and immigration rights groups, Since that announcement, the underlying assumption has been that we would indeed some kind of action from the President after the election, perhaps during the lame duck period before the new Congress takes office. Matt Yglesias, though, seems pretty convinced that the Administration may punt on the issue again depending on the outcome of the elections:

President Barack Obama says that after the midterm election he’s going to use his executive authority to create a fairly broad de facto amnesty program for many undocumented migrants living in the United States.

I’m just not sure I believe him.

Not that I doubt the president’s sincerity. I haven’t gazed into his soul on the subject, but the best read I have on White House officials is that they genuinely believe that they are going to do this. I just think they may be mistaken about their own likely behavior. Especially if Republicans take the Senate — which seems likely — it’s easy for me to imagine that they will look around at the new November landscape and have a change of heart.

Even if Republicans take the Senate, they still can’t stop Obama from following through on his promise. But as Brian Beutler writes, if the GOP takes the Senate they’ll be position “to place ‘executive amnesty’ at the center of proximate fights over funding the government and increasing the debt limit.” And the basic dynamic where Democratic Senators from states with low Latino populations aren’t eager to have a huge throwdown over the issue would remain in place. The odds of the White House losing its nerve as part of a strategy to hold the party together in sure-to-be-grueling battles with congressional Republicans seem high.

Further reducing the odds that Obama will plow ahead in the face of a bad election result is the relative silence of Hillary Clinton on the issue. If Democrats were having a normal 2016 presidential primary, you’d expect to see leading contenders out there making statements about their hope that the president will deliver for immigrants. But Clinton, not facing any robust opposition, is so far mostly dodging questions from immigrant activists and talking about the need to “elect more Democrats.” If activists don’t have the leverage to get a clear statement of support out of a presidential candidate, it seems unlikely that they really have the muscle to force the White House to act if the political climate is unfavorable.

Such a move would, of course, be incredibly disappointing to Latino voters and immigration activists, and with the 2016 election approaching soon after the midterms, it seems inconceivable at first glance that the President would throw this group of voters completely under the bus after having dangled the promise of some kind of action in front of them for the better part of a year. If nothing else, such a move would risk damaging Democratic Party fortunes going forward not so much because these voters would suddenly switch loyalty to the GOP, but because they would be likely to just stay home on Election Day and become less active in campaigns. This would do as much harm to the party’s fortunes as voting for the opposing party, if not more. Looking at this purely from the perspective of partisan politics, then, it seems inconceivable that the President would do something that would clearly be seen as a slap in the face to an important and growing constituency, and an important part of the Democratic coalition.

That being said, I believe that Yglesias is on to something when he argues that a Republican victory in November is likely to spook the President into either scaling back the executive action that was planned to make it much more modest than it might otherwise have been, or to put it off altogether in favor of another push for immigration reform in the 114th Congress that will likely not go anywhere. As he notes, in the context of a Congress fully controlled by Republicans, there will be tremendous pressure to delay action in order to get things like budgeting and other tasks needed to keep the government functioning. Even some Democrats are likely to be less than enthusiastic about the idea given the electoral price they could pay in the future. Finally, there’s the simple fact that President Obama has backed down on this issue in the past, and that a plausible case can be made that immigration reform is not important enough an issue to tie up the Federal Budget or other operations of government.

So, if the GOP does win the Senate, don’t be too surprised if we don’t see any executive action at all, or if we do that it is substantially more modest than previously hinted at.