Obama’s Pivot To The Economy: More Of The Same

As expected, President Obama's latest "pivot" to the economy is less than meets the eye. 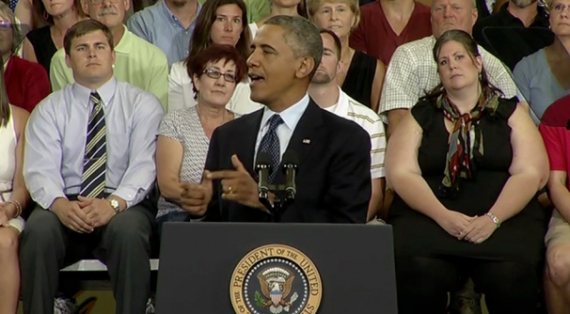 As I suspected, the speech today that marked President Obama’s much vaunted, and eighth, “pivot” back to the economy was pretty much just a rehash of what he’s been saying all along:

GALESBURG, Ill. — President Obama tried to move past months of debate over guns, surveillance and scandal on Wednesday and reorient his administration behind a program to lift a middling economy and help middle-class Americans who are stuck with stagnant incomes and shrinking horizons.

Returning to the site of his first major economic speech as a young senator eight years ago, Mr. Obama lamented that typical Americans had been left behind by globalization, Wall Street irresponsibility and Washington policies, while the richest Americans had accumulated more wealth. He declared it “my highest priority” to reverse those trends, while accusing other politicians of not only ignoring the problem but also making it worse.

“With this endless parade of distractions and political posturing and phony scandals, Washington’s taken its eye off the ball,” Mr. Obama told an audience at Knox College. “And I am here to say this needs to stop. This needs to stop. This moment does not require short-term thinking. It does not require having the same old stale debates. Our focus has to be on the basic economic issues that matter most to you — the people we represent.”

The hourlong speech, one of the longest of his presidency, resembled a State of the Union address at times. The president mainly offered revived elements of his largely stalled economic program, like developing new energy, rebuilding manufacturing, spending more on roads, bridges and ports, expanding preschool to every 4-year-old in the country and raising the minimum wage.

But he and his aides hoped to use the speech both to claim credit for the progress made since the recession of 2008-9 and to position himself as the champion of a disaffected middle class that has yet to recover fully.

He chastised Republicans in Congress for not focusing on economic priorities and obstructing his initiatives. “Over the last six months, this gridlock has gotten worse,” he said.

And he challenged them to come up with their own plans. “I’m laying out my ideas to give the middle class a better shot,” he said, addressing himself to Republican leaders. “So now it’s time for you to lay out your ideas.”

Senior advisers to the president said he frequently refers to his first speech at Knox College in 2005, long before the economic crisis that seized the country three years later. They said Mr. Obama was eager to discuss how much had changed in the nation’s economy since that first speech.

“Now, today, five years after the start of that Great Recession, America has fought its way back,” Mr. Obama said, citing the recovery of the auto industry, growth in energy sectors, higher taxes on the wealthy, new regulation on banks and 7.2 million more private sector jobs. “Thanks to the grit and resilience and determination of the American people, of folks like you, we’ve been able to clear away the rubble from the financial crisis. We’ve started to lay a new foundation for stronger, more durable economic growth.”

But he said too many Americans had been left behind. He said nearly all of the income gains of the past 10 years had gone to the richest 1 percent of Americans, and said the average chief executive had seen raises totaling 40 percent since 2009, while the average American earned less than in 1999

“This growing inequality, it’s not just morally wrong, it’s bad economics,” he said. “Because when middle-class families have less to spend, guess what? Businesses have fewer consumers. When wealth concentrates at the very top, it can inflate unstable bubbles that threaten the economy. When the rungs on the ladder of opportunity grow farther and farther apart, it undermines the very essence of America, that idea that if you work hard, you can make it here.”

Still, Mr. Obama gave little sense of how he would change that beyond giving more speeches in the next few weeks if he cannot win more cooperation from Congress. “I will not allow gridlock or inaction or willful indifference to get in our way,” he said. “That means whatever executive authority I have to help the middle class, I’ll use it. Where I can’t act on my own, and Congress isn’t cooperating, I’ll pick up the phone. I’ll call C.E.O.’s, I’ll call philanthropists, I’ll call college presidents, I’ll call labor leaders, I’ll call anybody who can help and enlist them in our efforts.”

As Chris Cillizza points out, though, there wasn’t much new in the President’s speech:

You could be forgiven if you thought you had heard President Obama’s speech on the economy today before. Because you have.  For most of the 2012 campaign. (Don’t trust us, read Obama’s 2012 acceptance speech at the Democratic National Convention.)

Things are getting better in areas like private sector job creation, home construction, energy independence and health care. But, the country isn’t all the way back yet. Republicans are looking out for the wealthiest Americans at the expense of the middle class. Times need to change.

“With an endless parade of distraction, political posturing and phony scandals, Washington has taken its eye off the ball,” Obama told a crowd at Knox College in Illinois this afternoon. “And I am here to say this needs to stop.” Later in the speech, Obama vowed: “I will not allow gridlock, inaction or willful indifferences to get in our way.”

That’s a nice rhetorical flourish and there are, without doubt, some things that Obama can make happen in regards the economy via executive order. But, to make any major progress — a grand bargain on debt and spending for example — President Obama needs Congress, including the House that remained in GOP hands in 2012 despite his stronger-than-expected victory on the same day.

And, it seems incredibly unlikely that this speech, which Obama gave some version of for virtually the entirety of his 2012 campaign, will change any GOP minds. (Remember that President Obama won with 332 electoral votes in an election that was, at least in part, a referendum on his handling of the economy.)

Take Brendan Buck, press secretary for House Speaker John Boehner, who summed up the President’s message thusly:  ”I’m going to give more speeches.” Or Republican National Committee communications director Sean Spicer, who tweeted this assessment: “More jobs will be created thru the announcement of the royal baby than thru latest version of this speech.”

To be clear, President Obama and his advisers were almost certainly under no illusion that a single speech — or even lots of speeches — could or would change the basic gridlocked reality that dominates political Washington these dys.

The speech wasn’t really about proposing ideas to help the economy though. As Cillizza goes on to point out, it was a purely political speech designed to position the President and his political party for the upcoming fights over the budget and the debt ceiling that Congress will be dealing with it gets back from the upcoming August recess while at the same time hitting upon the economic message that served him so well during the 2012 elections. Exactly how that’s going to help fix the economy, though, remains a mystery. Indeed, as Annie Lowrey notes, even conceding the point that the President made some good points about the structural changes to the economy that have made a “normal” recovery more difficult, he offers no ideas about how to remedy that situation:

Mr. Obama does not really propose any policy specifics to tackle the structural problems he says he believes remain the greatest challenge to the American middle class – the rising inequality and stagnant wages.

Granted, he’s tried to tackle them before. The Affordable Care Act at its heart taxes the wealthy to provide insurance coverage to lower-income households. His tax bill also raises levies on the rich, while cementing tax cuts for the middle class and working poor. But he has no such specific proposals in this speech, at least, only running through the same broad policy goals he and his team have outlined for some time, for infrastructure spending, education, housing finance and manufacturing.

The reality, of course, is that most of those ideas aren’t going to go anywhere in the 113th Congress, not just because of Republican opposition but because we live in a very different political world than we used to. Put simply, there just isn’t the money in the Federal Budget for massive spending projects anymore and, after the President’s first term stimulus project clearly failed to give a significant boost to the economy there quite simply isn’t the political will to engage in the kind of spending projects that Democrats used to be known for, and there isn’t likely to be any such political will at least until the Federal Budget Deficit is under some kind of reasonable control. More importantly, there’s really no reason to believe at this point that throwing more money at the economy is going to do anything other than create temporary bubbles that will end up causing more harm when they inevitably collapse. Indeed that seems to be exactly what’s happening when it comes to the Federal Reserve Board and its insistence on sticking with a Quantitative Easing policy that seems to be doing little more than creating a stock market bubble that is clearly going to pop once the Fed, as it will required to do as some point, changes its policy. That’s no way to run an economy.

So, don’t expect anything substantive to come from the President’s latest “pivot to the economy,” or from Republicans for that matter. It’s all just part of the same tired political game.